You can watch the whole stream or keep reading. This was fun to figure out. I’m loving the flexibility of this hybrid approach to animation. 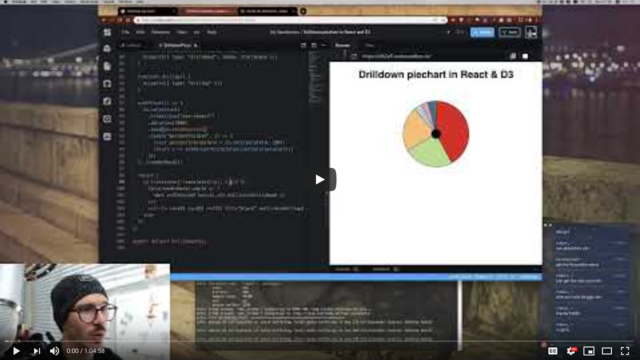 And if you prefer to jump straight into messing around with code, here’s the CodeSandbox 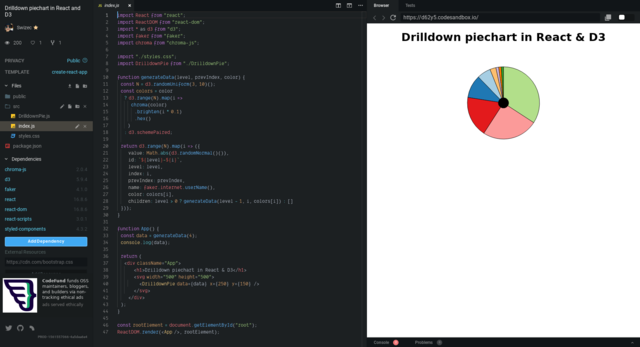 Hybrid animation is a merger of two approaches to animation I teach in React for Data Visualization. Also a brand new chapter I just added ✌️

Both those approaches work great.

You get heaps of control with the state-based approach, it’s fast, the animations look sick, and you spend a lot of brain cycles thinking about details.

Transitions are easier, look great, and you mess with the DOM just a little. React doesn’t like that but will tolerate your shenanigans if you’re nice about it.

But transitions fail when you have complex scenarios with animations spanning multiple components.

And that’s where hybrid animation comes in 👉 ease of transitions, full render control.

Cleaning up our piechart

We’re working off of the drilldown piechart from last week. So we’ve got the basics

We cleaned up state management and added the drill-up feature. 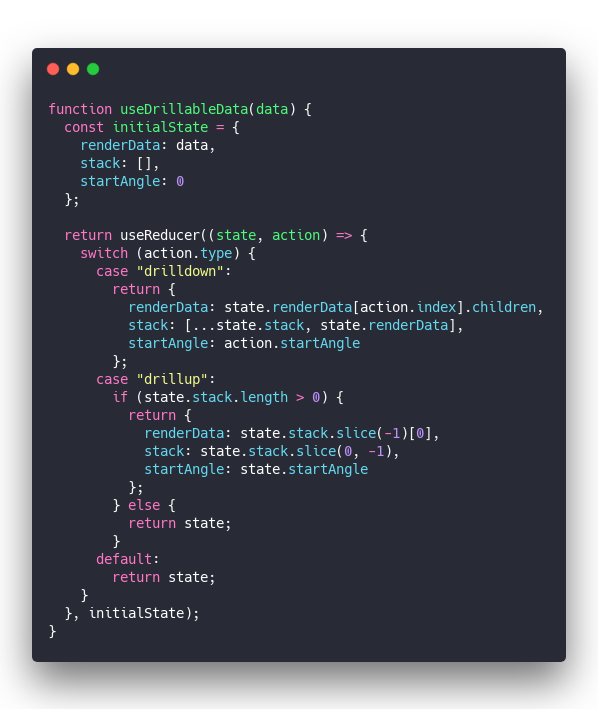 useDrillableData is a custom hook that takes our data and sets up a reducer so we can tie different state changes together.

When you drilldown we

When you drilldown we

If you’re at the highest level already, we do nothing.

To use this new state management mechanism we replaced the previous useState code with useDrillableData and called dispatch on click events instead of setState. 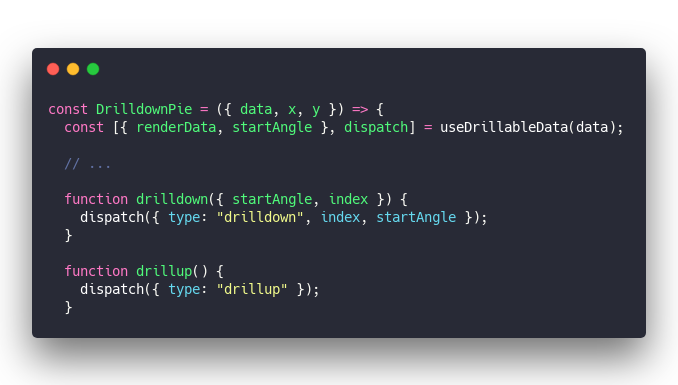 Now <DrilldownPie> can go in both directions. That was a problem before 😅

Hybrid animation is all about leveraging both React and D3 for what they do best: React manages rendering and events, D3 calculates the tricky stuff for smooth animations. 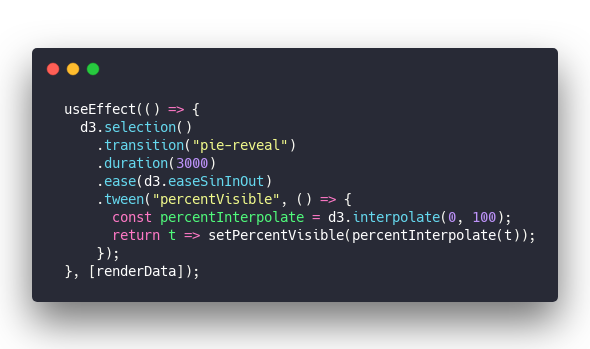 useEffect runs its method when renderData changes. That’s every time you drilldown or drillup.

The effect runs a D3 transition on an empty selection. Sets duration to 3 seconds, an easing function to look pretty, and fires off a custom tween.

Tweens are meant to manipulate DOM attributes, but when you think about it, they’re just functions that run on every step of the transition. They can do whatever you want to do on every keyframe. 🤔

We start with an interpolator from 0 to 100. Interpolators translate the time parameter, t, into a smooth transition from start to end. Easing functions manipulate that t parameter to create fun effects.

Interpolator in hand, we return a parametrized function that updates state with setPercentVisible using the interpolator.

Using that state change to animate our piechart looks like this: 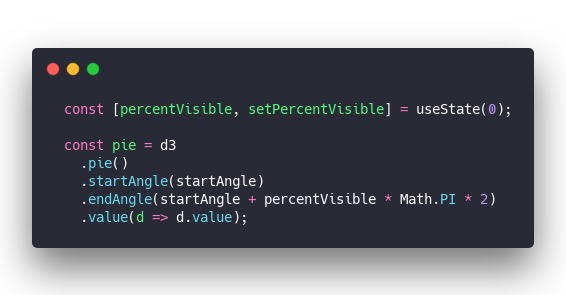 D3 pie generators take a startAngle and endAngle config and fit the entire piechart between those angles. If we keep changing the endAngle to be closer and closer to a full circle based on percentVisible, we get an animation that looks like a piechart revealing itself.

The trick here is that React hooks are magic and the tree diffing algorithm is fast as hell.

On each step of the transition, our tween changes state and triggers a re-render. When the piechart re-renders, it uses the updated angle.

The updated angle creates a bigger piechart. The arc components adjust and make themselves fit inside.

Crucially, React doesn’t re-run the effect. Nothing that our effect relies on changed, so it keeps running uninterrupted.

The result is a powerful new animation technique ✌️