D3 can even do 3D globe effects like this 😱 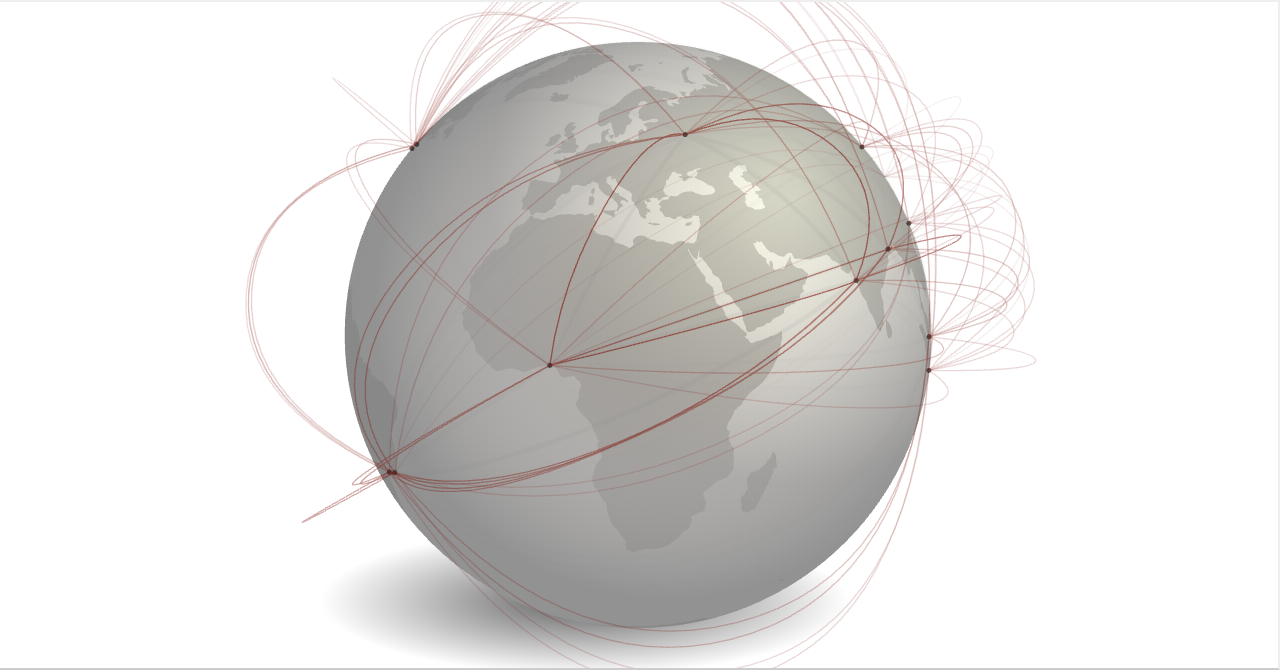 Used by The New York Times, The Guardian, and others for data journalism. Powering tools at Netflix, Uber, Gusto, 23andMe and other industry giants. D3 is everywhere.

If you saw an interactive data visualization, chances are it was built with D3.

2) D3 is the best way to build custom dataviz on the web. SVG, HTML, Canvas, even WebGL. You can do it all with D3.

D3 comes with a rich ecosystem of functions for almost anything you can think of. From simple medians, to automatic axis generators, and force diagrams.

Want to build a chart? You can; D3 might be too powerful.

Want to wow users with a unique twist on your dataset? Yep, D3.

Want users to dig into their own data? D3.

D3 is where it’s at for custom interactive data visualization on the web. ✌️

But have you tried learning D3 before? oof

Here’s how it went when I first tried to learn D3.

I took my idea and looked for a dataset. Some people have the dataset first. That’s probably smart.

I had no idea how to start. I knew D3 was great. I knew it could do what I wanted. But WHAT DO I DO!?

So I looked for an example … and discovered this mess

Ugh … what is this code even doing? No matter, copy paste and hope for the best, right? As long as it works.

And then you tweak and tinker and move stuff around until the project looks right. A working visualization great success!

Sure you don’t quite understand how it works and you’d struggle to change anything … but hey who understands their D3 code anyway? Almost no-one.

It’s like D3 was designed by someone with a PhD in data visualization. (it was)

3 key insights that help you learn D3.js from scratch

Turns out D3 ain’t so bad. 3 little concepts help you understand any example out there.

It’s a trick I teach in my workshops. The usual response goes something like “That’s it!? That’s what’s going on?”

All D3 examples are split into two parts:

First you prep your values, then you render.

I had to go through many examples to notice what’s going on. Inference learning is hard. Most people miss this pattern and it makes D3 look more confusing than it is.

The code above is part of a bar chart. Straight from D3’s documentation.

Here it is again

Doesn’t make a lot of sense does it? How does that 👆 create this 👇

First you have Data Manipulation.

And here’s the part that paints stuff on your screen

DOM manipulation in D3 happens via D3 selections. They’re a lot like jQuery $(something). Personally I like to do this part with React.

Our example does a few things here

That last part is people always get lost. It looks like magic. I published my first D3 book in 2013 and I still think that’s magic. 🧙‍♂️

You can think of .enter as a loop over your data and everything chained after .enter is your loop’s body. Sort of like doing data.map(d => append(rect).setManyAttributes())

Scales are D3’s most versatile concept. They help you translate between two different spaces. Like, mathematical spaces. I told you this thing was invented by someone with a PhD.

Scales work like the mathematical functions you learned about in school. A domain maps to a range using some sort of formula.

Colored shapes in the domain map to colors in the range. No formula for this one, which makes it an ordinal scale.

Once you have this scale, you can use it to translate from shapes to colors. shapes('triangle') returns 'red', rectangle is orange, etc..

You can create many different types of scales.

Linear, logarithmic, quantize, etc. Any basic transformation you can think of exists. The rest you can create by writing custom scales.

You’re most often going to use scales to turn data values into coordinates.

Sure .enter.append looks like magic, but D3 layouts are the real mind=blown in the D3 ecosystem. They take your input data and return a full-featured visualization.

For example, a force layout using forces between nodes to place them on the screen.

I don’t know how that works and that’s the point. You don’t have to. The layout does it for you.

Here’s a key insight about layouts: Layouts are the data part.

You take a forceLayout and feed it your data. It returns an object with a tick event callback.

This simulation now handles everything about rendering nodes. Changes their positions on every tick callback.

But it is up to you to render them.

A layout handles your data visualization in the abstract. You’re still in control of rendering. For a force layout, you have to update the DOM on every tick of the animation.

Once I figured this out, all fancy visualizations out there started making sense.

What’s something surprising you learned recently? Have you tried D3? tweet me

PS: you can watch me explain all this in a 5 min video