Engineers often jump into Redux, MobX, XState, or Recoil before they really need to. That’s what large orgs use so it must be right.

You are not Google, Facebook, Amazon, or Uber. You’re shooting yourself in the foot by blindly following their patterns. Probably. 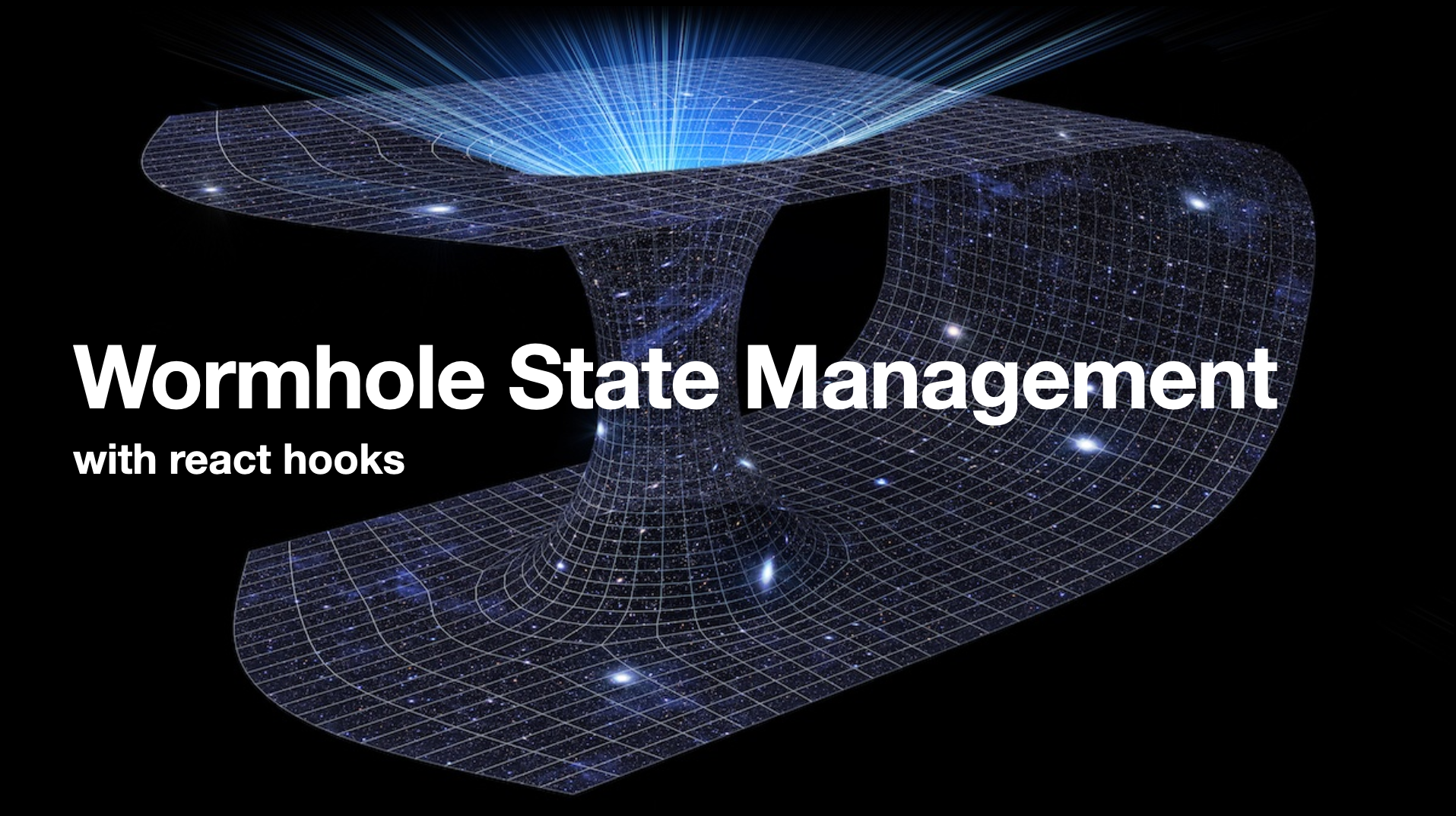 The Wormhole State Management pattern stems from a single idea: use the least complex machinery that solves your problem.

That’s why it’s a pattern, not a library.

You have control to make it as simple or complex as fits the problem. You can scale it from small examples to large codebases.

It’s the pattern behind libraries like useAuth and every React app – big or small – that I’ve built in the past 18 months. And now it has a name ✌️

Here’s how it works 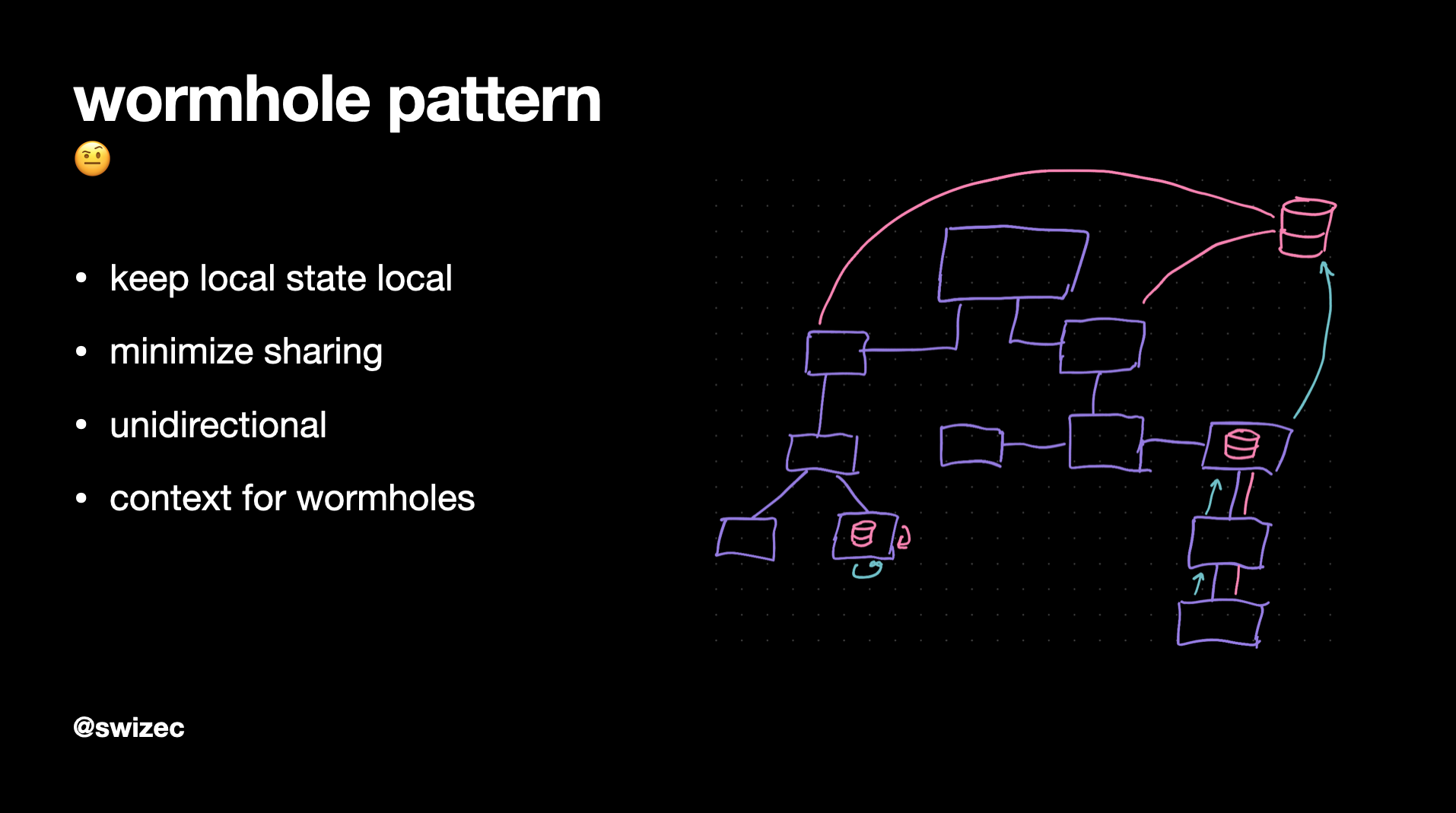 What’s the smallest amount of sharing you can get away with?

Keep your state there. As close to where it’s used as possible.

Context is like a wormhole. It bends your component tree so pieces far apart can touch. 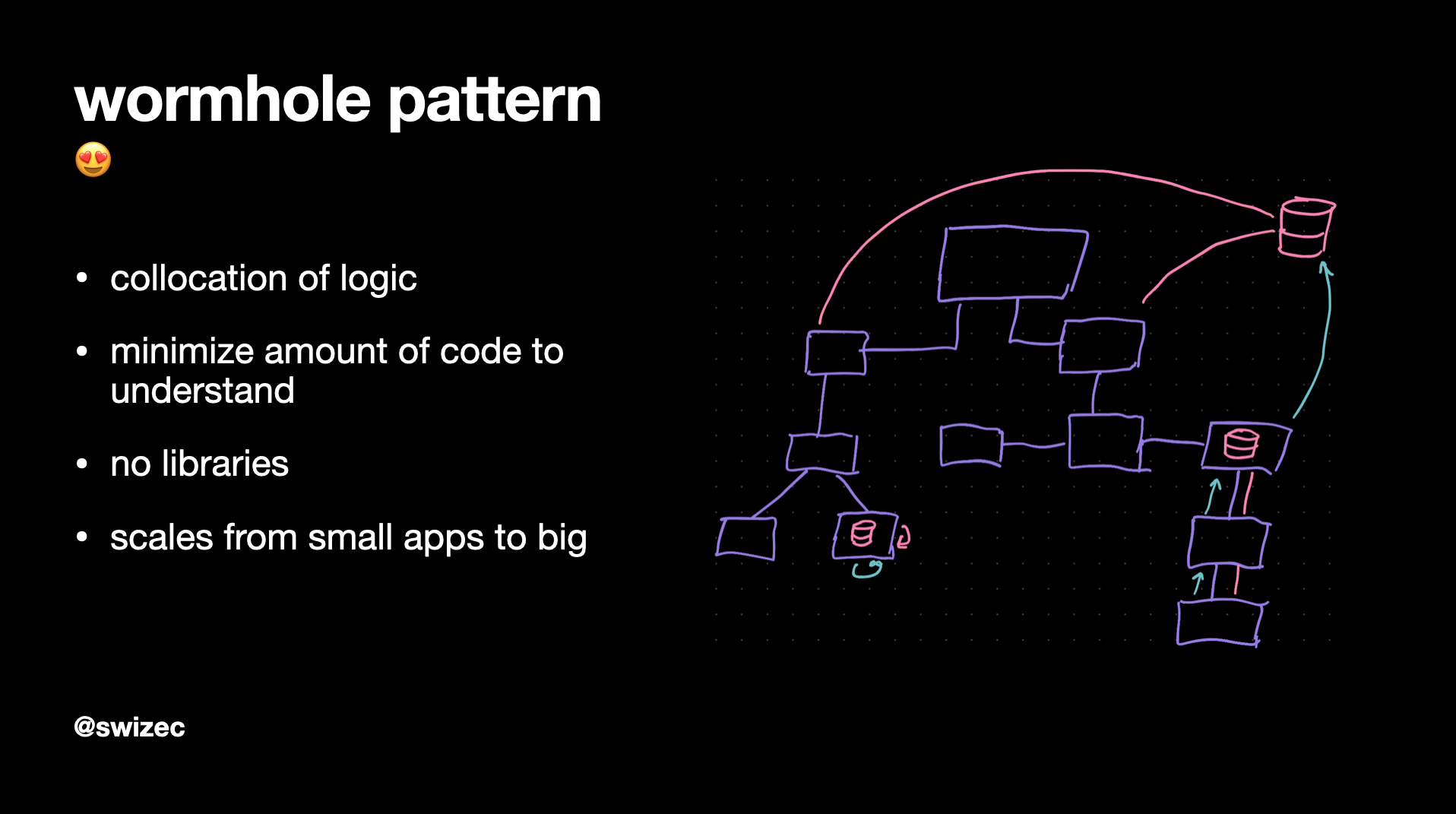 What’s the simplest state you can get away with?

Do that. You can always change it later.

You can always make a simple codebase complex, but you can’t make a complex codebase simple.

Your code becomes easier to understand, too.

Imagine stepping into a component you haven’t seen in 2 years. What happens?

First you read the component code. It kind of makes sense.

Then you travel 5 files into a different directory and learn about how its state works.

3 more files away is a bit more of its state.

Another 10 files away are all the side-effects from who knows what.

Before you know it, you’ve read most of the codebase and you’re still not sure how this component works. You try to isolate it to run some tests and realize it needs the whole state management jungle to work.

You wanted a banana. You got a gorilla holding the banana and the entire jungle.

Follow along as I build a contrived click counter. The Wormhole State Management pattern is best explained through examples ✌️

We start with useState because it’s the simplest. 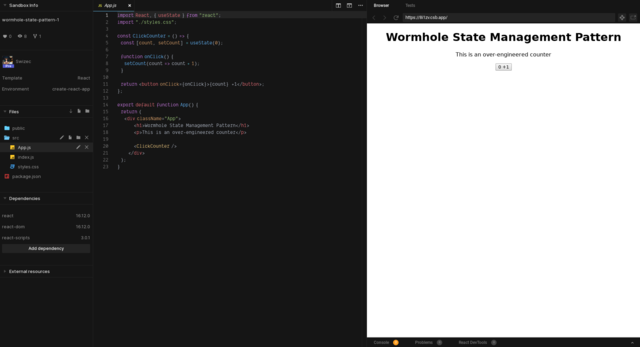 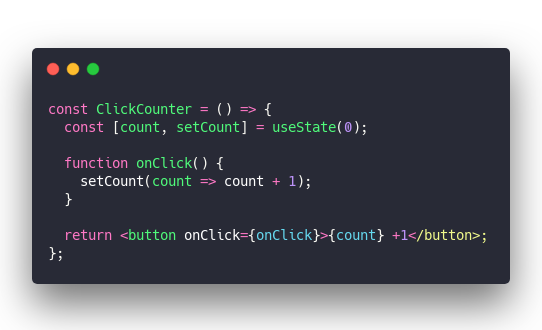 count holds the current number of clicks, setCount lets us update the value on every click.

Presentation isn’t the prettiest though. Let’s improve it with a custom button component and some nesting. 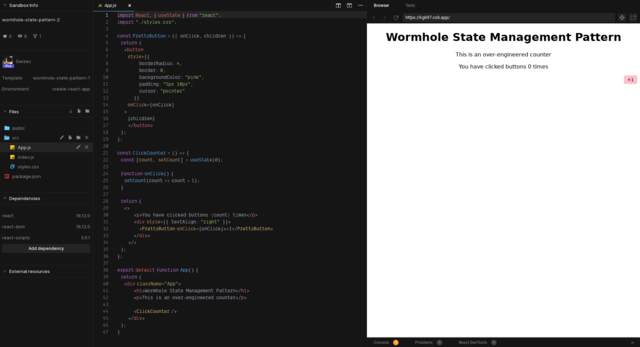 We created a reusable PrettyButton that ensures every button in our app looks fabulous. Nice and pink.

State remains in the ClickCounter component. 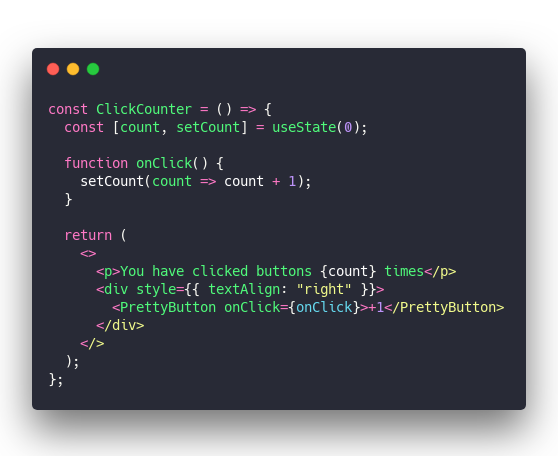 This is the least amount of state sharing necessary. We kept state simple, too.

The counter component cares about clicks and counts so it passes a callback into the button as a prop. Function gets called, state updates, component re-renders.

What if our state is more complex? We have 2 items that belong together.

You can keep complex values in your state. Works great. 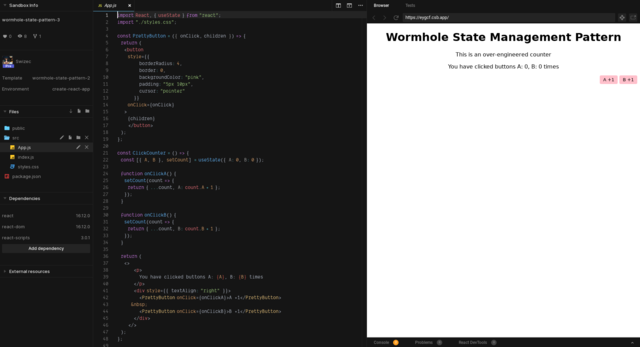 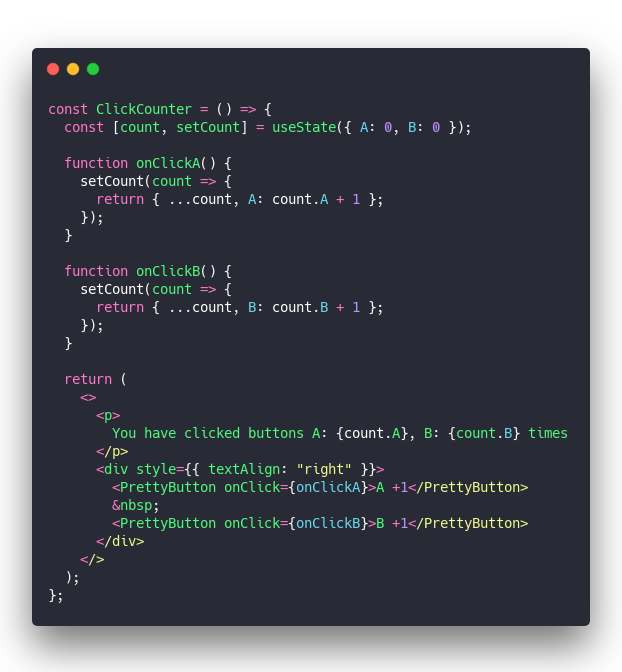 React uses JavaScript equality to detect changes for re-renders so you have to make copies of full state on every update. This gets slow around 10,000 or so elements.

You can use useReducer here, too. Especially when your state becomes more complex and items often update separately.

Similar state using useReducer would look something like this: 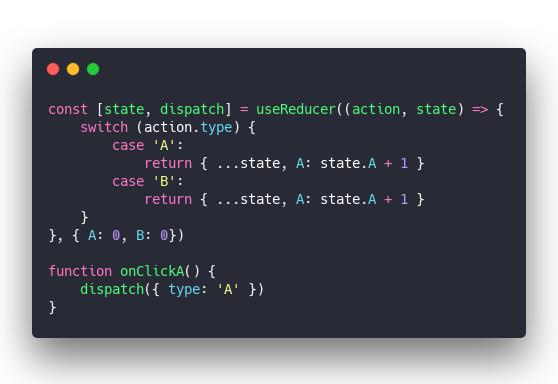 The more complex your state, the more this makes sense.

But I think those switch statements get messy fast and your callback functions are already actions anyway.

What if we want 2 buttons to update the same state? 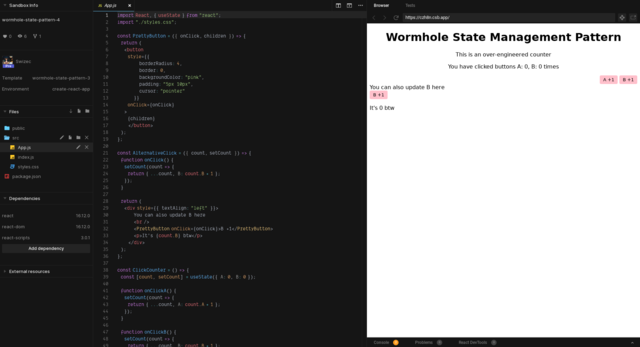 You can pass both the count and setCount to your components as props. But this is getting messy. 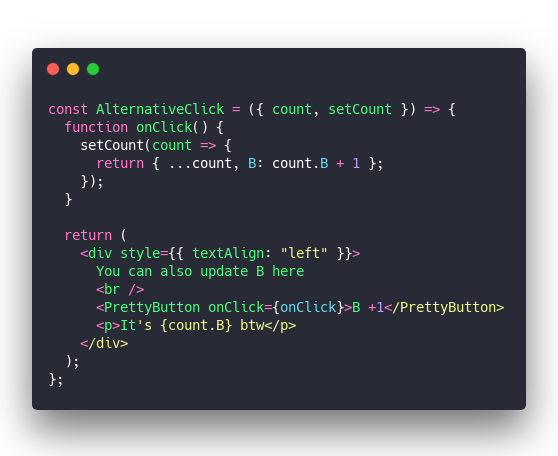 We’ve created a component that’s hard to move and needs to understand too much of parent logic. Concerns are split, abstractions are weird, and we’ve created a mess.

You can fix it a little by passing just the parts of state it needs and a more customized setCount. But that’s a lot of work.

Instead, you can use a wormhole to share state with a custom hook. 🤩 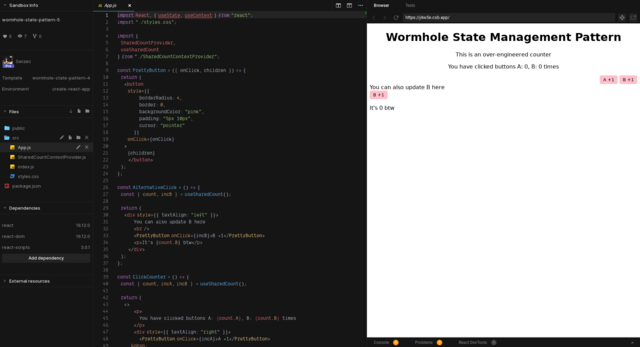 You now have 2 independent components sharing state. Put them anywhere in your codebase and it Just Works™.

Need to access shared state somewhere else? Add the useSharedCount hook and voila.

Here’s how this part works.

We have a context provider with some machinery inside: 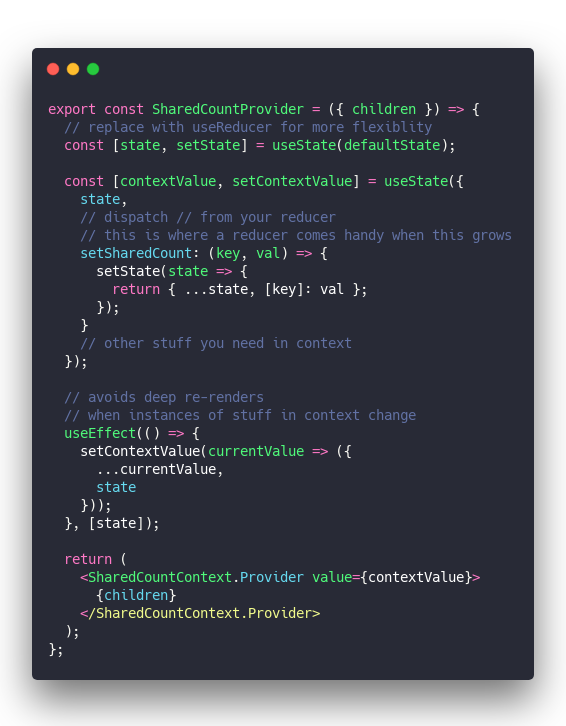 The context provider uses a rich state variable to keep your state. This is { A, B } for us.

The contextValue is a richer piece of state that also holds everything you need to manipulate that state. Often this would be a dispatch method from your reducer, or custom state setters like we have here.

Our setSharedCount method gets a key and val and updates that part of state. 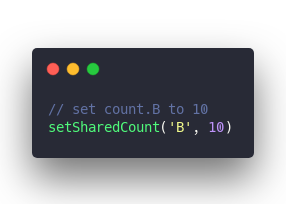 We then have a side-effect that watches state for changes and triggers re-renders when needed. This avoids deep re-renders every time we redefine our dispatch methods or whatever.

Every component rendered within this provider can use this same custom hook to access everything it needs. 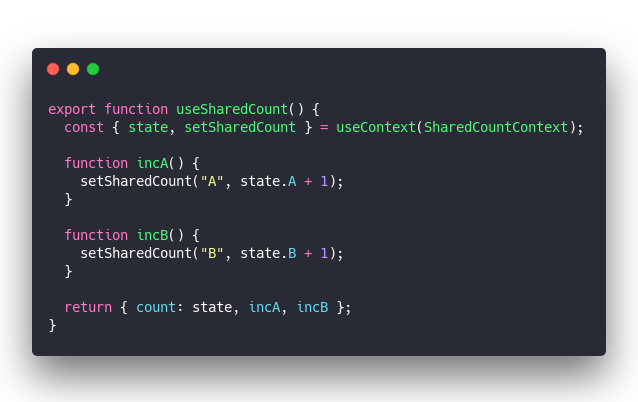 The custom hook taps into React Context for shared state, defines simpler incA and incB helper methods, and returns them with state.

That means our AlternativeClick component can look like this: 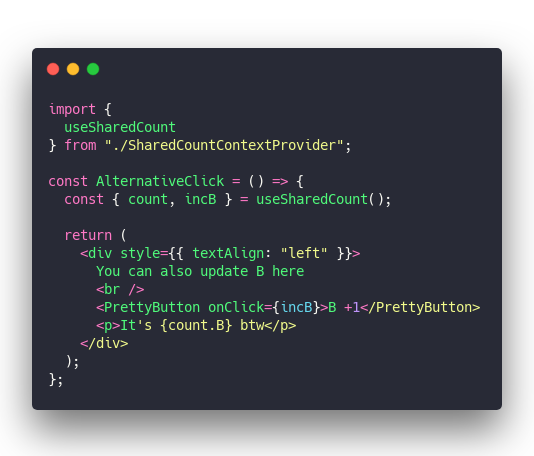 Gets count and incB from custom hook. Uses them.

Share state as little as possible. Use different context providers for different parts of your app.

Don’t make it global unless it needs to be global. Wrap the smallest part of your tree that you can get away with.

Yes even though it’s easier to always wrap everything.

What complexity? Keep it small. Don’t stuff shit in there that you don’t need.

That’s where the foot shooting starts. When folks put everything in global state.

Also why apps get slow 😉

I hate managing my own state, bleh

That’s fair. Did you know that this same pattern works with many state management libraries?

See that part in our SharedCountProvider that deals with state changes? This part: 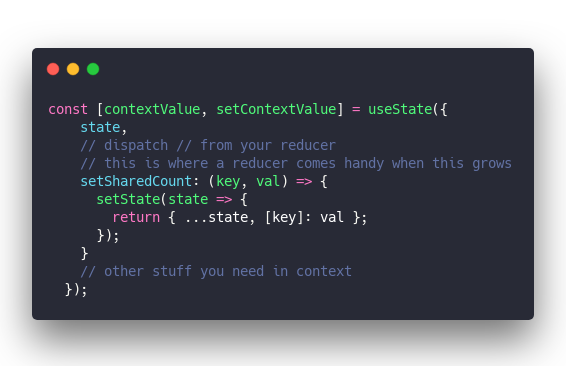 You can use XState for that. Or a reducer. Or even Redux, if you really want to.

Does this really scale up and down all sorts of apps?