Remark plugins are a little esoteric, and with the rise of Gatsby, they’re becoming more and more important.

Remark is a markdown parser built in JavaScript. “Parser” doesn’t do Remark justice. Remark is a whole compiler ecosystem built on plugins.

It’s the backbone of all Gatsby magic that involves converting markdown into HTML.

There are many Remark plugins, and the list keeps growing. This article is about how to build your own. ✌️

Why you should build a Remark plugin

Because you want a feature you can’t find yet. Simple as that.

For me, it was two features, so I built 2 plugins. But I packaged them both in the markdown-to-tweet package. 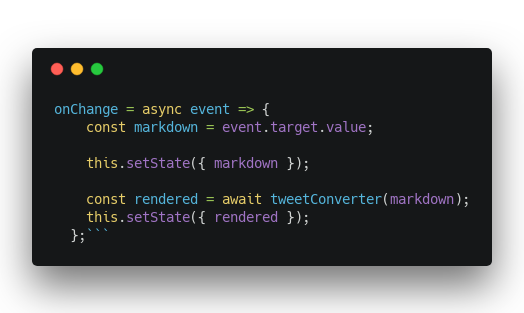 Screenshots work through an AWS lambda I built for techletter.app a few months ago and never got around to writing a blog about. I should fix that 🤔

Anyway, I couldn’t find a remark plugin that does that, so I built my own. That was my excuse. Kent C. Dodds built one to turn YouTube and Twitter links into embeds on his blog.

Maybe I should release the underlying Remark plugins separately 🤔

How to build a simple Remark plugin

Like I said, you can think of Remark as a compiler ecosystem. If you look at the traditional compiler architecture from Wikipedia…

…your plugin sits squarely in that “middle code generation” part.

You import remark and remark-html, instantiate remark, and tell it to use the html plugin. Then you call .process on your input source, and out comes a parsed HTML for you to use.

Remark itself doesn’t do much. It uses unified under the hood to parse Markdown into a MDAST – markdown abstract syntax tree.

Thinking in abstract syntax trees is hard. Lots of recursion and strange patterns if you want to do it yourself. Just think of the last time you tried manipulating the DOM directly. It’s a mess.

Lucky for you, the Remark/Unified ecosystem comes with helper methods. It’s like having jQuery for abstract syntax trees.

Say you wanted to build a plugin that transforms **bold** nodes into utf8 bolds. You find a function that handles the utf8 conversion and build a Remark plugin.

Your Remark plugin is a function that returns a transform. Also a function.

Simple as that. Let me explain.

You import the visit helper from Unified utilities, prefixed always with unist-util for some reason. There’s also a map and a reduce and all the other methods you commonly use to work with data.

The visit method deals with the mess and recursion of navigating around an abstract syntax tree.

Your transformer function gets the current tree and a reference to the file that’s being compiled.

You call visit() to do your manipulations.

This calls your bold function on every node of type strong in your tree. You can see a list of available MDAST node types here.

Took me a while to find that list. It helps a lot. 😅

The manipulation itself happens in your node visitor – the bold function.

You can do whatever you want. In this case, we’re changing node type to text so future plugins know not to mess with it. Then we take all its children, which are text nodes, transform their text, and set the resulting string as the value of the current node.

Text nodes with values are the lowest level in MDAST. They’re strings that (usually) don’t get changed further and eventually flatten into your output.

Changing node type is very important if you don’t want other plugins to mess with your changes. Or if you do and want to tell them how.

This is called the visitor pattern, by the way. It works because JavaScript uses pass-by-reference.

How to build an async Remark plugin

Asynchronous Remark plugins is where it gets tricky. Remark does support async plugins, but you might find it has a tendency to skip your plugin if you do it wrong. Had that problem myself.

Thanks to Huy Nguyen’s post for helping me figure it out.

Around that, your transformer has to return a Promise and resolve it after you’re done changing nodes. Like this 👇

codeScreenshot is the Remark plugin in this case. It returns a function that returns a Promise.

Inside that Promise, you can see the two phases of an async Remark plugin.

The first step collects nodes we want to change. We’re still using the visitor pattern with the visit helper.

But instead of changing the nodes, we push them into a nodesToChange array. That’s because the visit function can’t deal with asynchronous code.

This is where I got stuck for a couple hours 😅

Here we iterate over the nodes we collected earlier. getCodeScreenshot takes a node value, passes it into an API, and returns a URL. Eventually.

Thanks to how await magic works, we know our loop finishes only once all the URls have been fetched from the internet. We call resolve() to tell Remark we’re done transforming nodes.

That’s how you build a Remark plugin. You have a new superpower 💪

Please use it to add wonderful magnificent things to the Remark and Gatsby ecosystem and supercharge all our websites.

Everyone’s moving their blogs to Gatsby right now. It’s hot. You can make them hotter!