Wednesday was a fun day for me my friend. A system I’d been working on for months went live and everything died. 😅

You might remember reading about this system in December when I wrote about Logging 1,721,410 events per day with Postgres, Rails, Heroku, and a bit of JavaScript. Yes I know what you’re going to say …

Yo, Swiz, dunno if you’ve heard, logging is a solved problem bro. It don’t have to be this hard. Just write to a text file and parse it later.

Think of this more as telemetry for an entire product, business, and everything in between. We need logs from various clients (web and mobile), we need to tie those logs back to real users and devices and business tests, and we need every department in the company to use these for analytics to drive business decisions.

Yeah it touches everything.

So of course I crashed it.

Not only did I crash it. I brought down everything. Every single API that we’ve got was errorring out. For a whole hour.

The backstory is that we’re moving the whole system to AWS Lambda as a … microservice. A nanoservice? A bunch of FaaS? What do you call a gaggle of lambda functions that work together as a system?

So I’ve been working on that for a few months and on Wednesday it was time to unleash Phase 1 upon the world.

Pipe logs to AWS and see what happens. Disable the lambdas that push to Datadog and Mixpanel.

Goal was to run both the old and the new system in parallel and work out the kinks. I was certain something was going to go wrong. And we can’t have an outage of a business critical system now can we?

Instead we had an outage of everything. 😇

Our API requests create metrics, you see. Something like backend.request.success with a bit of metadata about the request, the user, stuff like that.

Most metrics go through a function that adds more info. A sort of catch all for meta data when it makes sense.

But those backend metrics do not. There’s too many of them and the metadataing is too slow. Hella SQL queries.

While refactoring I moved a piece of code from the normal flow to the metadata flow. 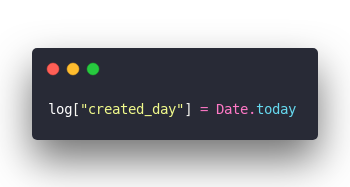 Moved it a few lines down.

In production we use that field to build table partitions. It’s a way to speed up Postgres tables by effectively splitting them into smaller tables. You need that when you’re writing millions of rows per day.

Partitioning is a lot like the sharding concept from NoSQL.

That throws a database error.

That database error says “Yo you can’t write this log”

That error throws an exception

That exception bubbles up

Your service goes down. You have a big outage.

You have to stop eating lunch and go fix that shit. Yeah don’t run a big scary deploy and go eat lunch thinking all will be well. All will not be well.

The hotpatch was easy. Move the code, deploy. Service restored.

The proper fix included writing some tests. And we discovered another error thanks to Sentry errors.

Fixing that error caused another error because I’m dumb. But that error was in the background with no effect on the end users. Just meant that a queue was filling up with data and would eventually drain when we fix the bug.

Those are the kind of errors you can take your sweet time to fix. 👌

What did I learn?

A bunch of things!

It was just this one darn thing …