One of the most common burning questions readers ask 👉 “How do I add tooltips to my charts?” followed by “How do I sync them between multiple charts?”

So we played around and got that working on a stream 👇

Using hooks because why not. It’s fun to experiment with the future 🙂

We built a simple dashboard with 3 scatterplots because scatterplots are easy to build. Filled with random data because real small datasets are hard to find.

Here’s a CodeSandbox, try it out 👇

First, you need a context and some state

We’re using context to share state between charts. No prop passing, just state that everyone has access to. It’s like a Redux or MobX store without the setup.

A couple lines is all we need:

Not sure yet how I feel about this state pattern with hooks, need to play around some more. Here’s the idea:

Might look cleaner to export context in the useTooltip hook itself? 🤔

Either way, the idea here is that every component has access to the same tooltip state. It tells them whether to display a tooltip and its context. Any component can take over, usually on mouse over, and call setTooltip to set a new tooltip.

If your system has just 1 mouse cursor, like most computers do, this approach works great. If you want to support multiple simultaneous mouse over events, you could run into trouble.

Second, you need a scatterplot

Like I said, we used scatterplots because they’re quick to build. Take some data, pick two dimensions, iterate and draw circles.

We use the useContext hook to get access to our tooltip state. Here’s where using useTooltip would be nicer but I couldn’t quite figure out how to make it work.

That gives us tooltip and setTooltip. I’ll show you how they get into our context in a bit.

We return a grouping element using the transform prop to position at (x, y), iterate over our data, and render circles.

Each circle gets a position based on our scale and a passed-in value accessor. xDimension or yDimension. This lets us re-use the same scatterplot for random looks into our data you’ll see. onMouseOver we set the tooltip to current datapoint, onMouseOut we reset it back to false.

Then we render the component.

Third, you need a

The component takes coordinates and content. Renders them in an SVG foreignObject so we can leverage HTML’s built-in text formatting abilities.

Reflowing text in SVG yourself is painful 😉

This one is very dataset specific. We know each info has a name, a zipCode, and two numbers. Display them in some nice format and that’s that.

Each of our scatterplots now has its own instance of a tooltip. They’re all driven by the same state in context, but they’re different tooltips.

Fourth, you need an App to hold it all together

Our App component holds everything together. Generates data, renders scatterplots, sets up a context provider. Everything.

So that’s a long ass function. This is our hook-based future I’m afraid. Surely patterns will develop to clean this stuff up?

But also we were just playing around. No need to make it clean 🙂

We start with some fake data. useMemo makes sure we calculate it once and keep it in memory through any re-renders. Makes our dataviz look more consistent.

The useTooltip hook from earlier gives us a state object that we’ll feed into our tooltipContext. Again a good opportunity to make this easier to use, but need to play around some more.

For the rendering, we wrap our dashboard with tooltipContext.Provider, give it our state, render an SVG element, and plop down three scatterplots.

This is where making scatterplots flexible comes handy. We’re reusing the same component, giving it different params, and it gives us different insights into the same dataset.

The result, a dashboard with synchronized tooltips. 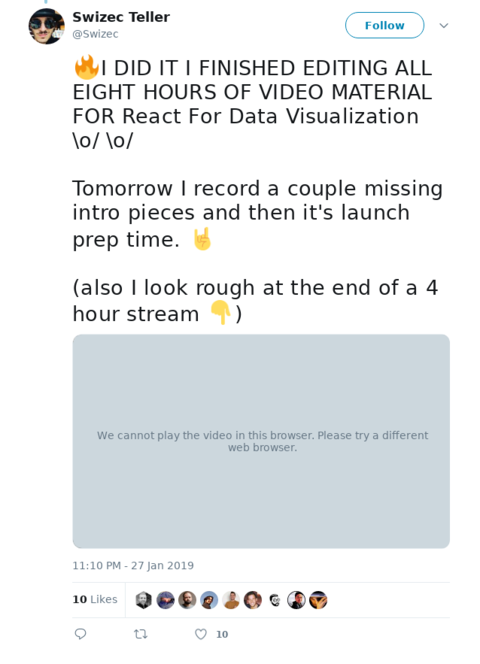 But now we know. This is a good datapoint for the future.

Fingers crossed it doesn’t take me 4 years to produce the next full video course 🤞 I think the 5 month flow is doable.

Right now we’ve got 94 videos in 27 sections and 133 lessons. Today I’m recording a couple explainer intro videos to give context and ease onboarding and then we’re off to the races launching this thing.

Thanks everyone for your patience. Watch your emails for more info coming soon 🙂 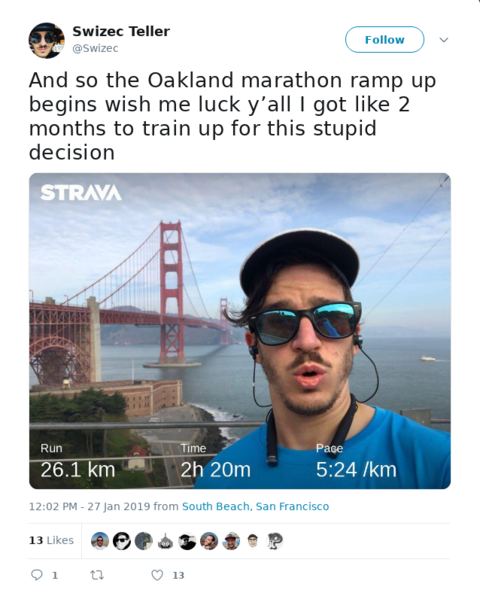 A few TIL lessons from the week

These days I post a cool tip in the form of a TodayILearned on twitter every day. Here are some good ones from this week. Click on them, they’re threads 👇 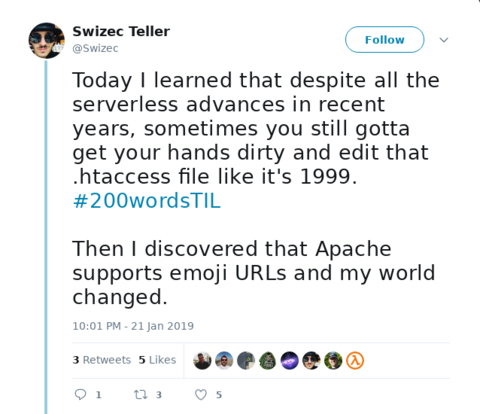 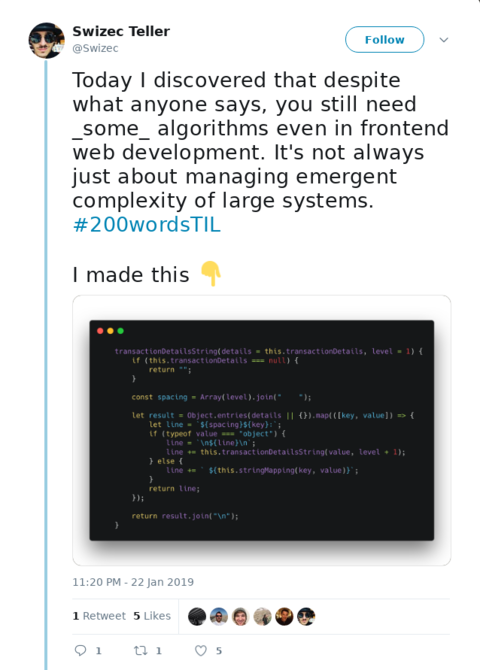 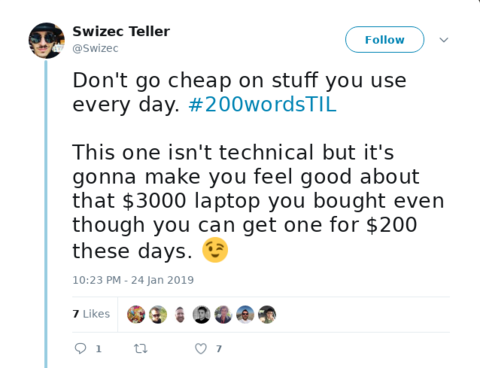 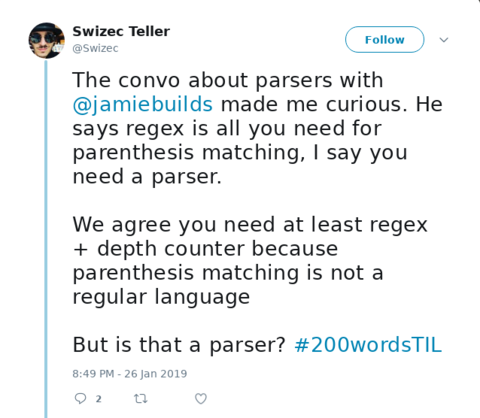 This one has some cool CompSci fundamentals ^ 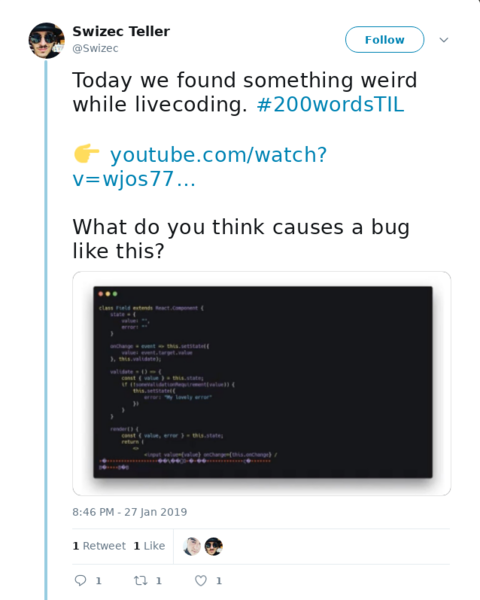 This one is an epic mystery with a weird resolution

And as always on a Monday, some cool stuff I discovered this week 👇

Script-8 which is a whole 8-bit computer built in JavaScript. Great for making retro games.

This is C++ but I really liked it: A KABOOM animation in 180 lines of C++. Neat effect and good writeup on how to get there.

And I think this is a cool idea, but I haven’t had time to listen to the episodes. A React learning course compiled out of podcasts

Hope you have a great week. and to that person who asked Do you even read these? in the typeform below: Yes I do but I can’t reply.