Messing around with React Suspense gave me a great idea: What if you could fallback to preloaded data instead of a loading spinner? 💡 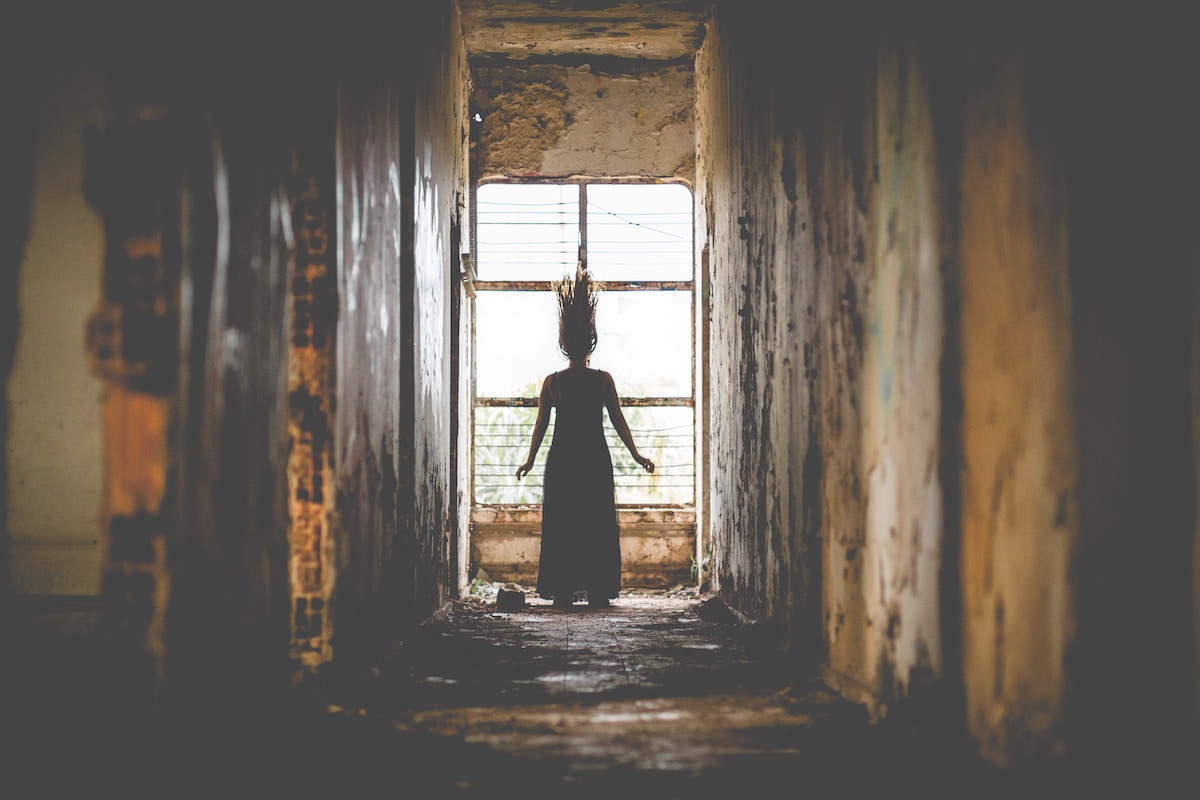 You could leverage Gatsby’s approach with React Suspense for a smooth user experience. Load partial data at build time, bake it into the static HTML, then load the rest when a user renders your page.

You can see it in action here 👉 https://gatsby-suspense-poc.now.sh/

Gatsby with dynamic data, some background

Let’s start with background on using Gatsby for dynamic pages.

Gatsby is a static site builder. You build a website in React, use GraphQL to connect to data sources, and compile a static HTML page.

The result is a page that can work offline and loads without API requests. This makes it fast.

When your site loads in a browser, however, it becomes a React single page app. React hydration means there’s no flash of blank content and no need to re-render the HTML.

You can add Apollo Client for GraphQL support or use fetch(). It’s just a JavaScript app at this point.

I like to wrap the root node in ApolloProvider and use react-apollo-hooks for the rest. 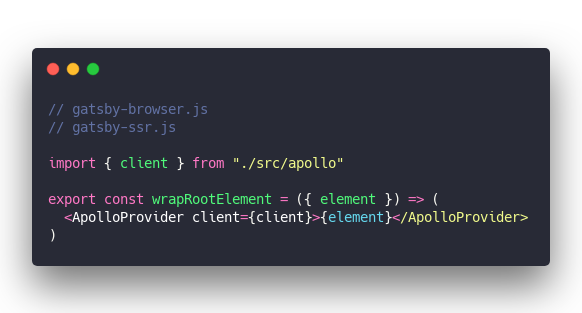 That gives my entire app access to GraphQL for a specific server. Using Star Wars API for this example. 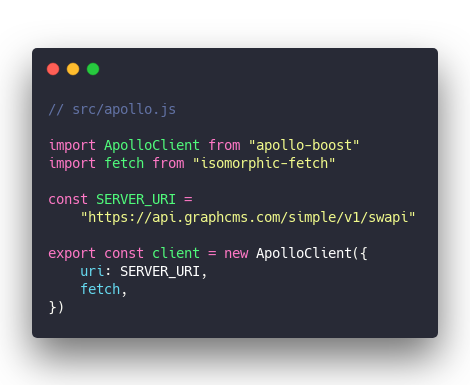 Once you have “cached” data baked into your HTML and the ability to load fresh data on render, you’re presented with a dilemma.

How do I show static data, communicate that more data is loading, and show fresh data when I’ve got it?
If the user is offline, what then?

Those are tough problems. Traditionally, you’d render a component, show a spinner, fetch more data after render, then re-render once done. 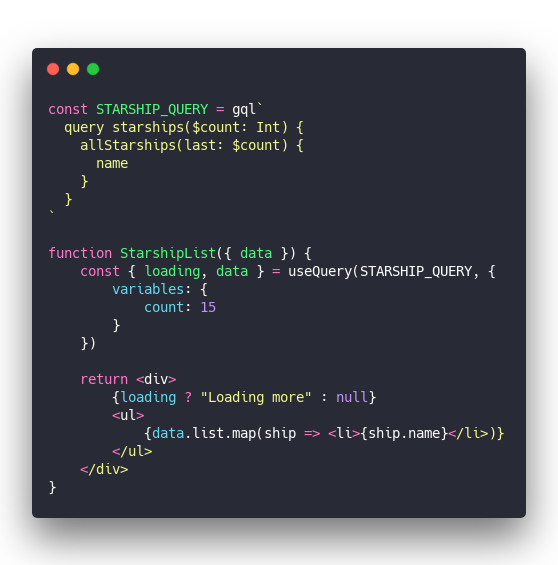 STARSHIP_QUERY is a GraphQL query that returns a list of $count starships from StarWarsApi, swapi for short.

useQuery runs the query and returns a loading state and data.

Component renders the loading notification and a list of starships from props. Those were baked in at build time. When fresh data arrives from our API call, the component re-renders.

With React Suspense, you can make that API call preemptively. While the page is loading.

Here’s how you might set it up for Gatsby. Or at least how I did. 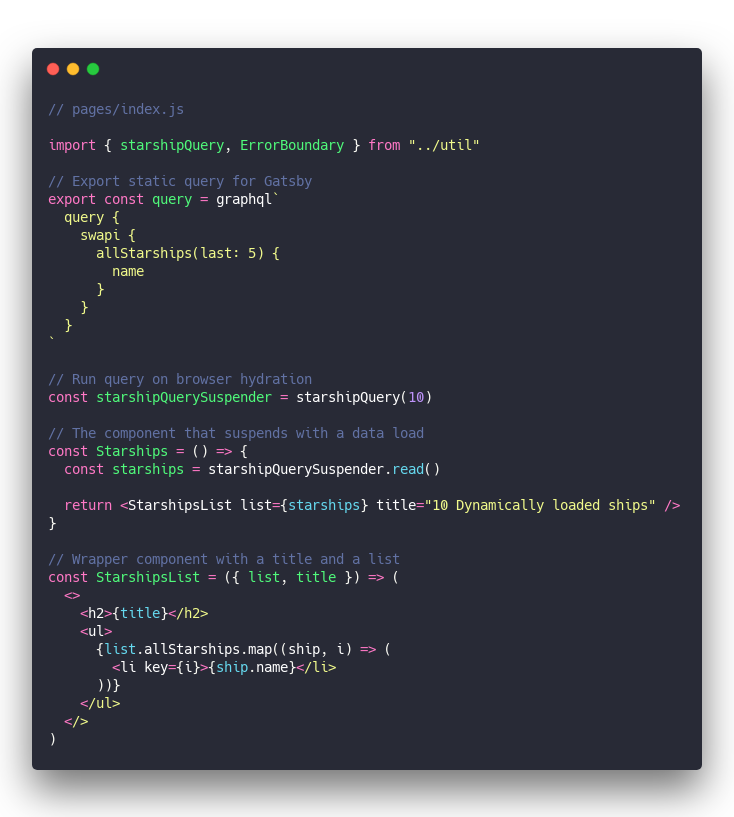 All this goes in the index.js page. The first page you see in a Gatsby app.

We start with a static page query for Gatsby. This one runs at build-time and bakes data into our HTML. I tried having a shared query between Gatsby and Apollo, but the graphql (gatsby) and gql (apollo) tags are not compatible.

Then we’ve got the starshipQuerySuspender, which runs in the browser when Gatsby turns this page into a JavaScript app.

The <Starships> component suspends with a data load and renders <StarshipsList> when data shows up. The static page is going to render this same component with its data.

In the IndexPage component we can then use <Suspense> to coordinate loading and error states. 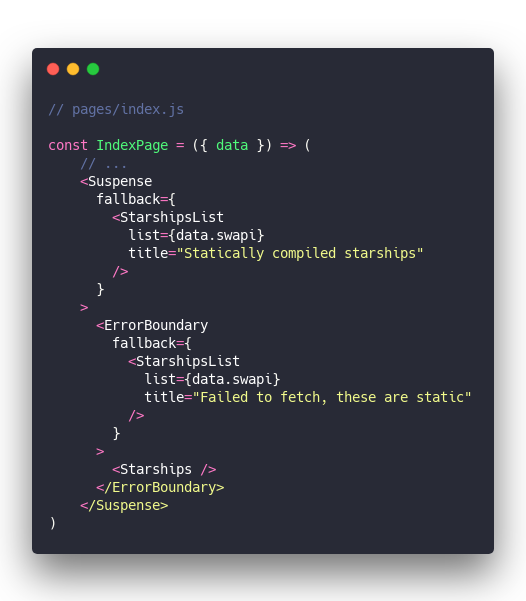 Our Gatsby page gets static data via the data prop. This works offline too, you can try, here 👌

Here’s where the fun starts:

Suspense sees that we’re running a GraphQL query (the suspender.read()) so it renders the fallback render prop. But that prop uses our static data to render a list of 5 starships. It’s not all of them, but it’s better than nothing. 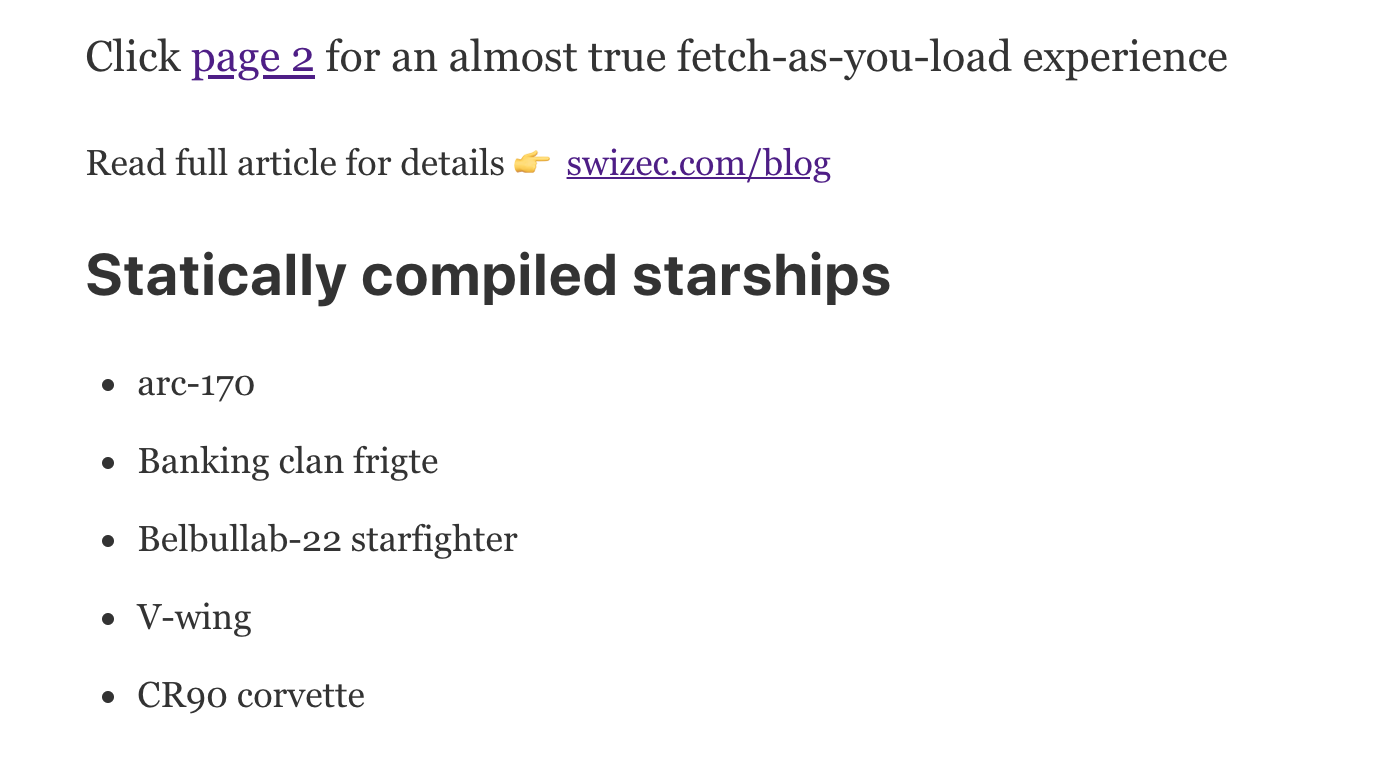 Even if it all goes to shit, our user gets the most important data they’re looking for.

Once our query finishes, Suspense renders the main list. Now with fresh data from the API. 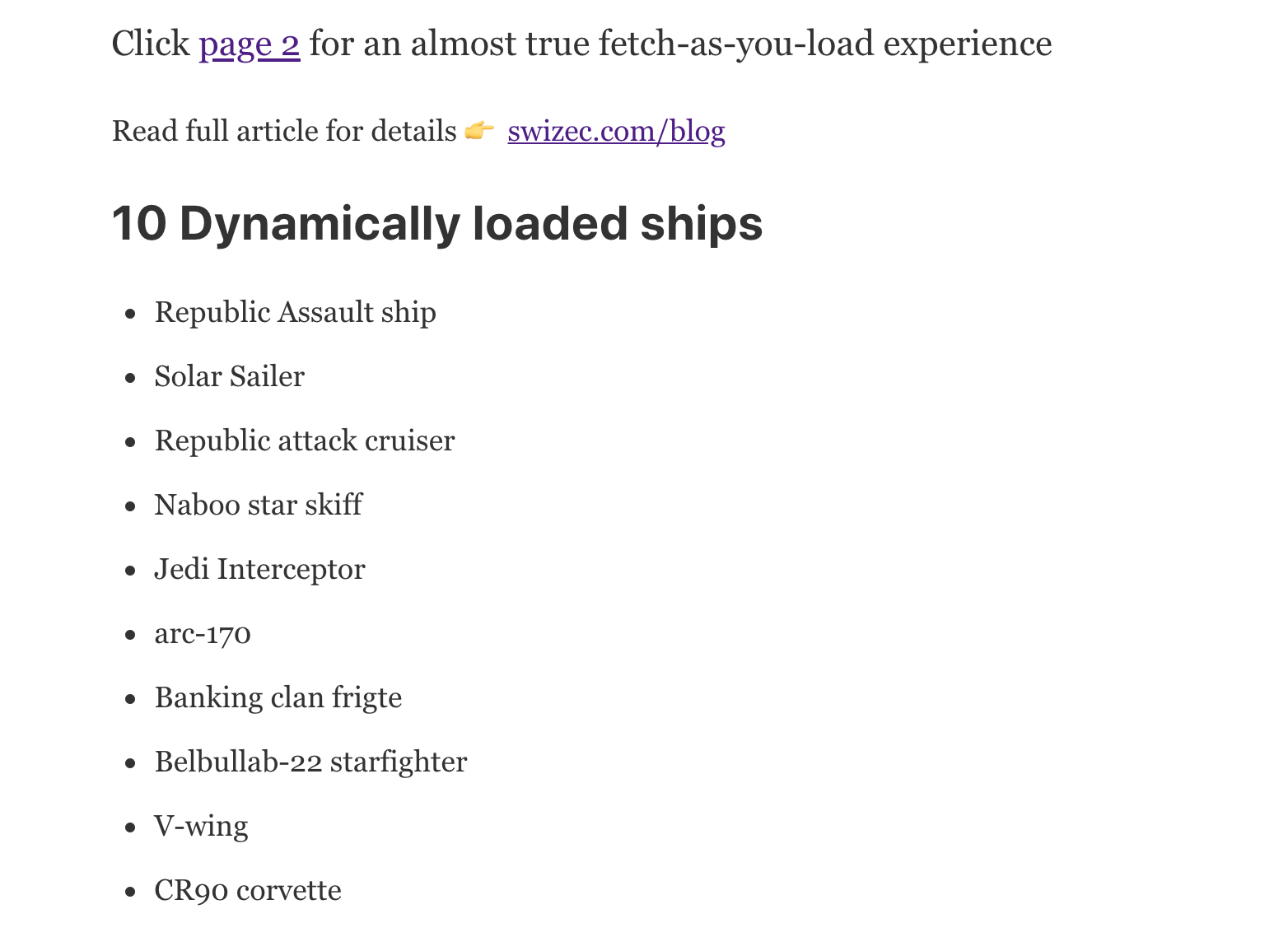 That <ErrorBoundary> gives us an extra feature: We can show something useful even if the user is offline and our query fails. 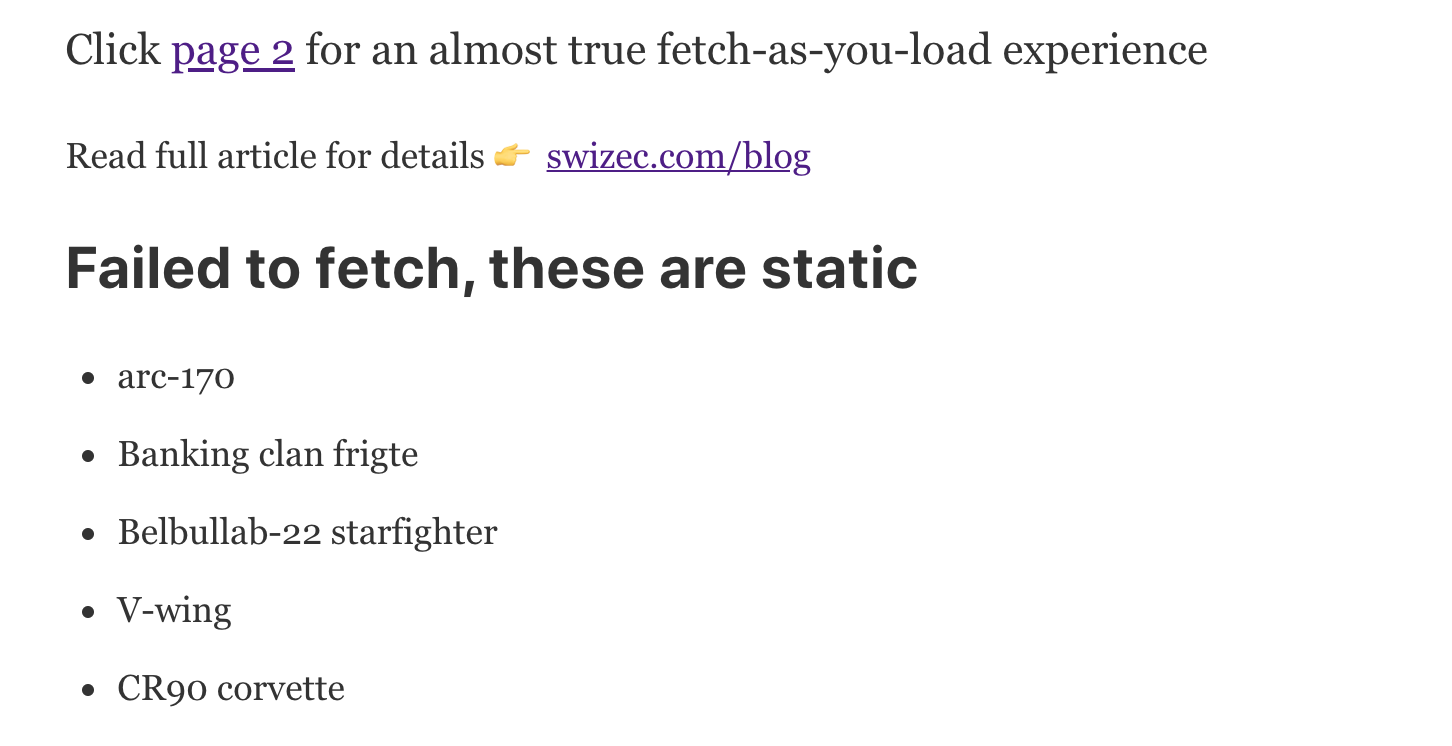 Same fallback to static data, now with a warning that you’re offline ✌️

Now that approach works great, if your site has a single page. Where it breaks down are multi-page sites. Which is most of them.

I tried replicating the same code on page-2.js and this happens:

That just won’t do. We need to hook into the router’s lifecycle. Gatsby uses @reach/router by the way.

And that’s where I’m stuck. Tried a few things, none worked.

Worked but just as slow as running a query without Suspense.

Reach Router lets you pass state to pages with a state prop in your <Link> component. Whatever you pass shows up in the location prop on the target component.

Works great for static values, but did not work with this approach:

Not sure why, but trying to pass a function made the whole state value null.

Another approach I tried was using Gatsby’s browser APIs. You can hook into various parts of the page lifecycle with special methods in gatsby-browser.js.

Thought I could manipulate the location prop passed into a page and I can, sort of.

When you console.log that value, it shows that you successfully passed the dataSuspender. This was great news until I realized that data shows up after the page renders.

How do I know?

I tried everything I could think of. Some of this stuff is either a bug in Gatsby, a bug in @reach/router, or just not meant to work this way by design.

Next step: bug people online to find out 😛