I messed up. I got arrogant, and I rushed it, and it flopped. Let me tell you how.

We used the same premise as last year:

Using that approach, we made \\\$31,323 last year. This year, our products were better, our mailing lists were longer, the market was bigger, and our website was prettier. We made $9,388.

Marketing felt like screaming into the void. Where last year there was chatter on Twitter, responses on Facebook, and excited emails, this year there was… nothing.

I don't think we were shadowbanned. I think our copywriting was shit, our product didn't have a hook, and our marketing was too impersonal. 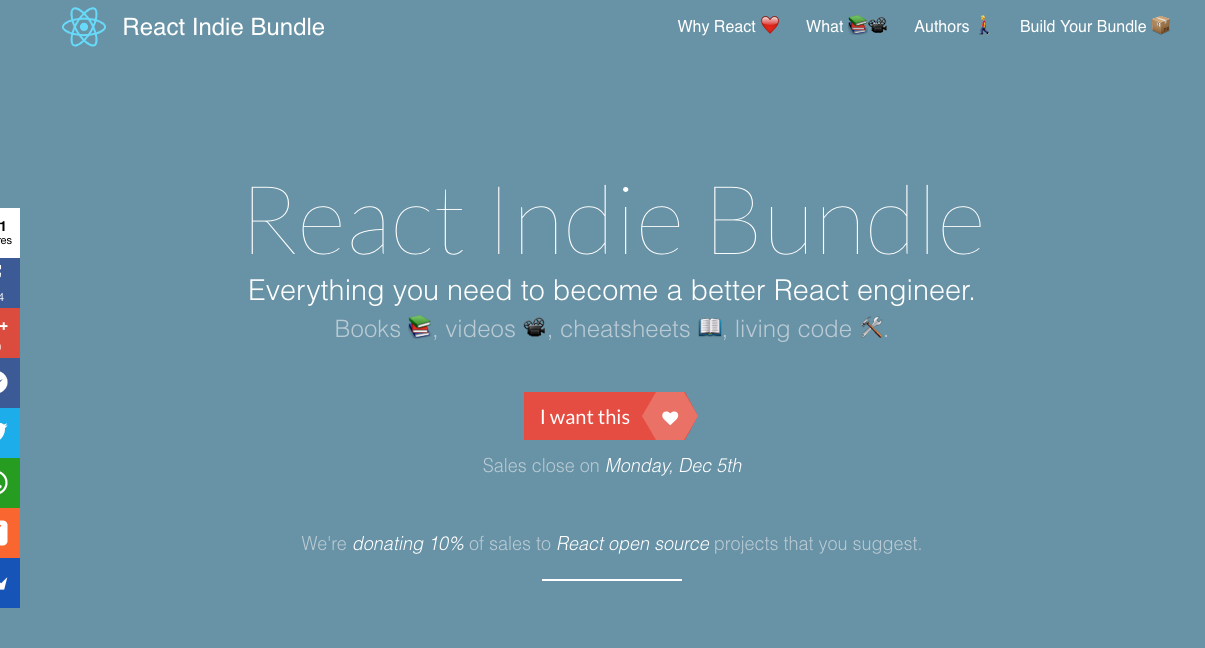 That was the first thing you saw on the website - a big fat what.

Oh, it's a bundle. It has everything I need. What a logical choice to buy. Yawn.

Compare that to last year's site: 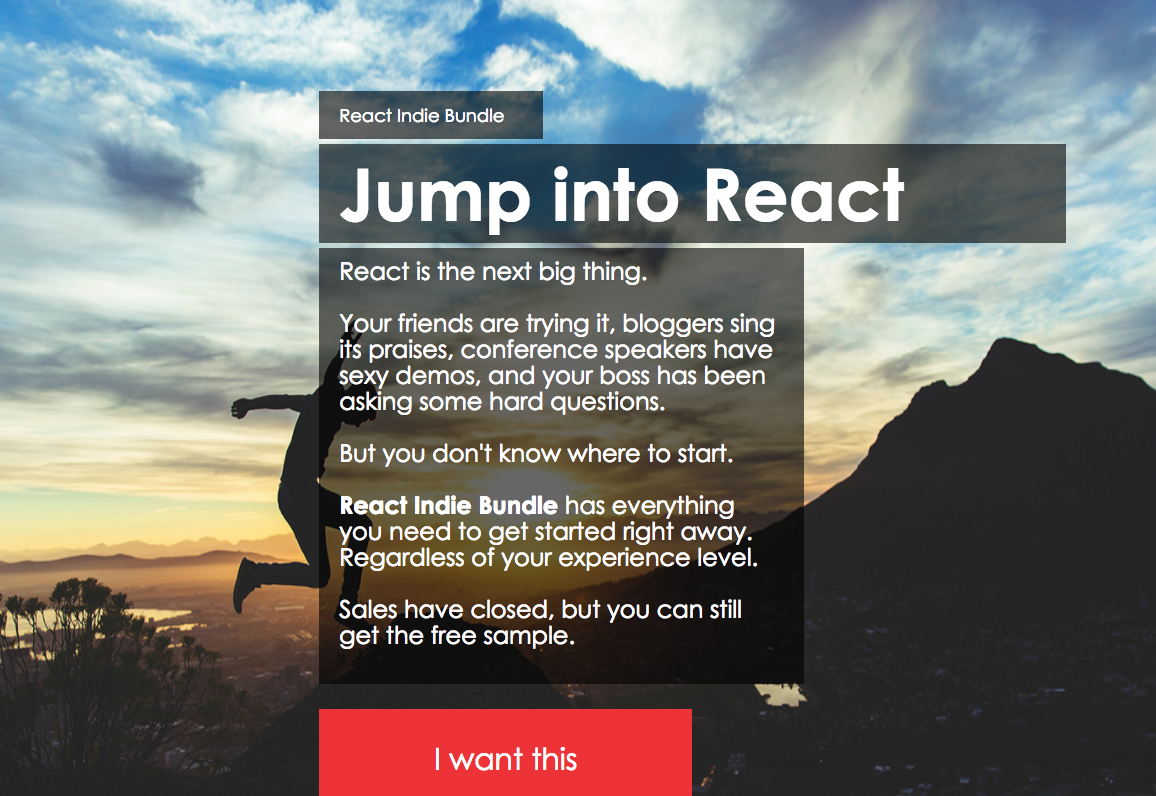 Oh, it's the next big thing! My friends are talking about it, and you can help me out? Of course I'm gonna scroll down.

Continue down and the new page gets a little better on the why vs. what approach. It talks about why people love React. 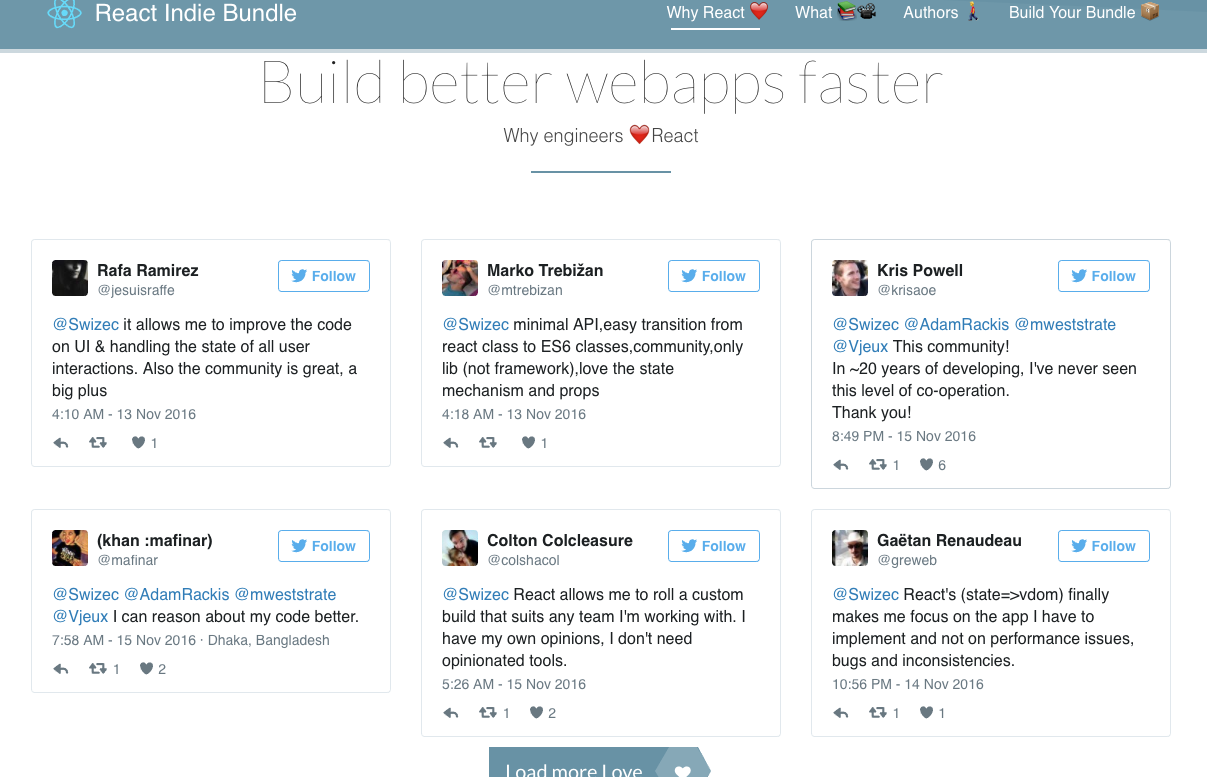 This should have been the hero panel. This sells React. This is emotion. The above crap is just sterile and bad.

Now look at the second panel on the old page. 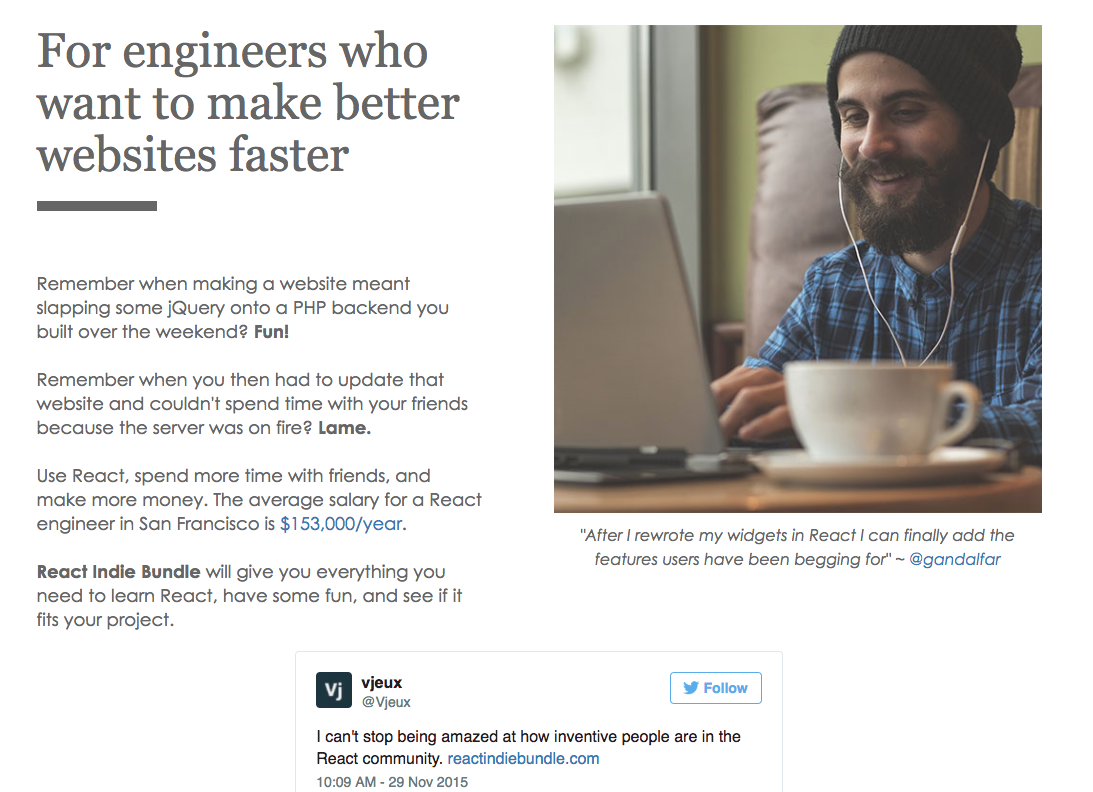 Emotions. There's a happy dude in a beanie, copy-evoking memories, talking about the salaries people can make, and reminding you that we're here to help you get there.

I forgot to mention that anywhere on the new page. Not a single why you'd want to buy the bundle. Just a bunch of here's what it is, here's what you get, this is what happens.

You don't give a shit about my products unless I tell you why you should.

A product without a hook

Do you know how much we used it in our ads and emails? Zero.

I don't even know why. Maybe I felt like it was too dirty to put money at the forefront? That should've been my first clue that something was wrong. When you don't feel good talking about your hook, something's wrong with either the hook or the product or both.

It was definitely the product.

Last year, we added face time with the authors, and that was great. Not many people used it, but it was special. Something they couldn't get anywhere else. So they bought our bundle then told us "Eh, I don't really care about the consulting. I just liked the idea."

I took that to mean, "Oh cool, no need to include the difficult-to-logistics consulting calls to this year's bundle."

Boy, was I wrong. Removing those made our bundle meh. It removed everything that was special and unique and turned it into just a bunch of stuff, most of which people preferred to buy separately.

We sloppily added interviews with React ecosystem creators and the ability to assemble your own bundle, but it was too little too late. We failed to incorporate it into the core messaging, and we didn't even send a very strong email or two about the change.

This is what happens when your product lacks a hook and nobody cares.

Last year, we had more than 14,000 visitors, and 13% scrolled down enough to find the Gumroad buttons. Looks like those 5% make all the difference. Network effects kick in, sales are made, things happen.

We, or at least I, thought we were big and cool and that everyone would have been excited to see the bundle come back. Thousands of email subscriber fans; hundreds of people on Facebook; many, many engaged followers on Twitter.

Unlike last year, we did very little direct community outreach via meetups and Twitter DMs and things like that. "Ha, they'll be excited to share our stuff!", we thought.

In truth, I don't think they ever found out it even exists. Meetup organizers and community leaders have a lot on their plates, and it takes relationship building to get on their radar.

The things that worked

All of that said, some things did work!

They didn't lead to conversions because our copywriting was bad, our product didn't have a hook, and our re-engagement stuff was kind of weak. But hey, at least we got in front of people, and they knew the bundle was out there, right?

Brand marketing or whatever that's called.

Building a donations list worked pretty great as well. We put up a Github page where anyone could suggest their favorite project and upvote it. The community suggested 6 projects and made many upvotes.

Well, more upvoting and engagement than I've ever seen on a Github repository. Maybe others are used to more. :)

Not a terrible result for a week of sales. About the level of an average month for me, personally. I don't know about the others.

I would have added all of it, but my girlfriend has been buying joint Christmas presents like it's the end of days. ?