The birth of LISP - a summary of John McCarthy's original paper

A programming system called LISP (for LISt Processor) has been developed for the IBM 704 computer by the Artificial Intelligence group at M.I.T. The system was designed to facilitate experiments with a proposed system called the Advice Taker, whereby a machine /../ could exhibit “common sense” in carrying out its instructions.

With that, John McCarthy starts off his Recursive Functions of Symbolic Expressions and Their Computation by Machine paper. Two years after LISP was originally developed, long before many of the concepts presented in the paper become the norm.

Garbage collection, for instance, was first proposed/described in this paper (invented in 1959, paper published in 1960).

While LISP never really delivered on its promise of artificial intelligence and the whole field has started turning in a probabilistic rather than descriptive approach, this paper is a good read for anyone whose interests in computer science and engineering go beyond comparing Ruby to PHP on a syntactical basis.

For starters we need some core mathematical constructs. These are well known, but the conditional expression was believed to be new at the time.

Now that we have a solid basis, it's time to define symbolic expressions (S-expressions for short), show how they can be used to define functions, how those functions can in turn be represented as S-expressions and finally we will define the all important apply function, which lets the computer calculate anything.

S-expressions are formed by using the special characters dot, left-, right- parentheses [·()] and distinguishable atomic symbols (defined in this paper as capital Latin letters, digits and a single space).

So an S-expression is any ordered pair of S-expressions. Strictly speaking we are supposed to terminate any nesting of S-expressions with a [NIL](http://en.wikipedia.org/wiki/NIL%28programminglanguage%29 "NIL (programming language)"), but we agree that (m) stands for (m · NIL) __and that instead of a dot operator we can write expressions as lists, which makes our lives a lot easier

Functions of S-expressions use conventional notation, except they're limited to lower case letters, brackets and semicolons to distinguish them from S-expressions. These are called M-expressions (meta-expressions)

McCarthy then defines five Elementary S-functions and Predicates. atom tells us whether something is atomic, eq compares two atomic things and tells us if they're equal, car returns the left part of an S-expression, cdr returns the right and cons constructs an S-expression from two atoms.\

By introducing Recursive S-functions we finally get a strong enough class of functions that we can construct all computable functions. McCarthy now defines a bunch of useful functions - _let's look at the example of _ff, which returns the first element of an S-expression.

The next thing we need is Representing S-functions as S-expressions. We do this simply by changing lowercase into uppercase and properly handling some cases around labels and quotes. The M-expression for subst

But it's very simple in principle. Add some tactical line breaks and code alignment and you get readable code!

The Universal S-Function apply is the all important function that gives us a way of applying a function to a list of arguments. It's a bit tricky to define and reason about - all you have to keep in mind is that it behaves exactly the same as the function it is applying. The main consequence of this is that we can now implement a machine (an interpreter) that only needs to implement the apply function and it can run any program we write.

And we've come at the juicy goodness of functional programming - Functions with Functions as Arguments. The idea is that we can use an S-expression as an argument for another S-expression similar to what we did with apply, except in a more generally useful way.

The paramount example is maplist (called "map" these days), which applies a function to every member of a list to construct a different list - for instance increasing all values by +1.

LISP's core is a system of translating S-expressions into list structures that can be evaluated by a computer. This system was intended for various uses, the ultimate of which was the Advice Taker system.

Representing S-Expressions by a List Structure can be visualised with a set of connected boxes. Each box is divided into two parts - the right being the address field and the left being the decrement field. They contain the locations for subexpressions returned by car and cdr respectively. 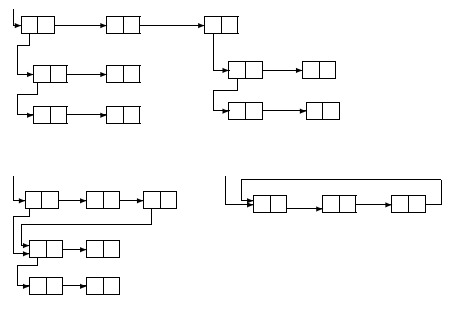 Substructures can be repeated, but cycles aren't allowed - the bottom-right example wouldn't fly. When subexpressions are repeated their in-memory representation depends mostly on the program's history, but luckily this doesn't affect the final result.

The reason McCarthy prohibits circular structures is interesting - they might help with representing, say, recursive functions, but there are too many difficulties with printing them in a world with our topology. 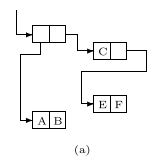 When storing atomic symbols an association list is used. These are used for anything from print names, to memory locations of values - the machine uses them for whatever low-level concept it needs to make the mathematical principles of LISP work.

For example, to store the word DIFFERENTIATE in an association list on a computer with 6-bit words a structure such as this is used:

Even back then computers had more memory than a typical program would be using at all times, so a concept of a free storage list was introduced. At its core, the free storage list is simply a list structure that catalogs all the available free memory and starts with a pointer called FREE.

A straightforward concept no doubt, but it introduces the invention of garbage collection. Whenever a subexpression is no longer needed it can be added to the free storage list. And because we're using lists, every single redeemed element is useful!

When our program runs out of free memory the garbage collector (called _"a reclamation cycle" _back then) goes through all accessible registers and marks them. Then it simply goes through the whole memory and anything that wasn't marked as accessible gets added to the free storage list.

It's easy to imagine how the elementary S-functions work in the Computer. _They amount to nothing more than returning the correct part of the word. So _car returns the address value, cdr the decrement value, cons takes from free storage and fills the values ... and so on.

Everything else is merely constructed from elementary functions.

There are some problems with compiling recursive functions because of a possibility of register collisions - needing a part of memory that is also used by the previous level of recursion - which is solved by employing a mechanism we now know as The Stack.

Further on McCarthy details the current state of the LISP system - everything basically works, a manual is being prepared, the compiler is 60-times faster than the interpreter and floating point operations are slow.

There is also a short chapter on an alternative presentation of functions of symbolic expressions called L-expressions. They are the basis of linear LISP and use the more familiar elementary functions first, rest and combine.

Mathematically speaking linear LISP includes LISP, but for computers regular LISP is said to be faster.

Now if only there weren't so many damn parentheses ... I tried to learn LISP (clojure really), I really did. But the syntax was just too jarring.