Workflowy is to TODO as git is to svn

It is no secret that I am generally a very fuzzy scattered person.

It is also no secret that I am trying to work on that at least to a certain extent.

Ok so I've tried numerous things to get myself organised; everything from entering TODO's into Evernote, to Mac widget thingies and the pretty awesome Things app and just plain writing stuff on a whiteboard and erasing it when it's done.

So far all of the solutions proved to have their advantages and disadvantages.

Evernote syncs on all devices, but is pretty stiff and clearly meant for other things.

Widgets are too hidden and I forget about them.

Things was nice and very shiny and, dare I say it, quite a bit useful. But over time it became simply annoying. Only on one computer, always pestering me about "OMG you forgot to do this! OMG it's already 100 days overdue! OHMYFUCKINGGODMAN!!!"

Out of all the things the whiteboard seemed the most efficient way of doing things. There it is, always on the wall, every task I haven't completed staring me in the face every time I turn around. Not judging, just gently reminding me that hey, I might as well do it if I ever want to see a clean whiteboard again.

But hey, that's not very portable either. There's one at the office and another one in my bedroom. Any task that isn't strictly tied to a one room radius of the whiteboard will never get executed because I'll forget about it on my way out the door ...

And then along comes Workflowy with a small post on HackerNews saying "Hey, we're from YC2k9 and we've launched. We help you organize your brain" (this was a week or two ago)

Then I watched their video. And I drooled!

Workflowy was exactly the app I've been looking for. It was love at first sight.

Basically what they give you is an infinite online whiteboard that you can take anywhere.

Awesome! Brilliant! Doesn't even begin to describe it.

Everything you write on Workflowy is a nested bulletpoint list. This is where it gets mindblowingly awesomer than an old fashioned TODO list.

The old way was writing a list of items you have to do in a somewhat hierarchical order. God forbid you have to switch contexts ten times a day and end up with a big mess.

Workflowy is a bit more like git. You have branches running in parallel. The way I use it is to have the top level represent a list of contexts I work on and then on the second level I just jot down the workflow. It's not exactly a TODO list, it's more of a "OK here's how I'm gonna tackle this problem".

Because of how my brain works it's really quite a bit less organized than a TODO list. But it still helps me not fuck things up by forgetting them. 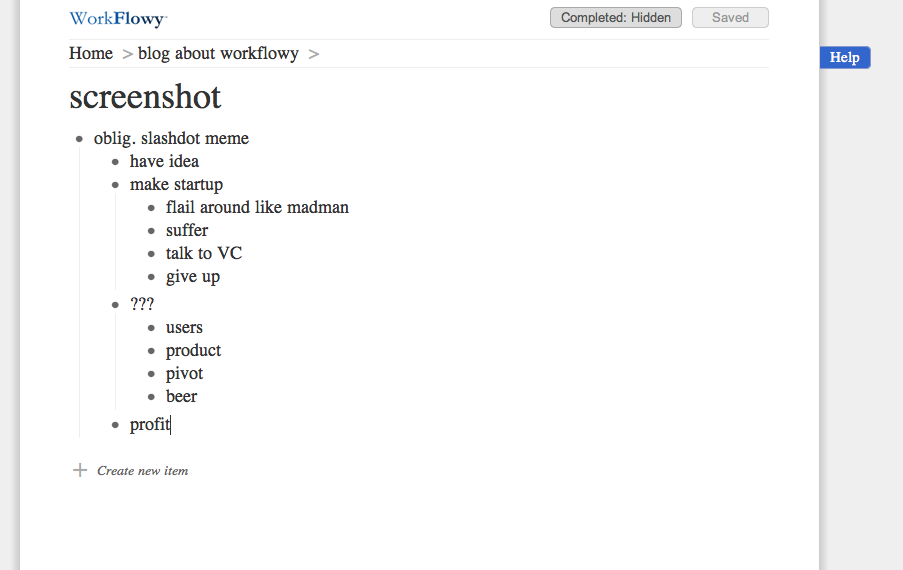 Really, I urge everyone who doesn't like their organisation tool to force them into boxes and limit the way they work to try out Workflowy.

Actually the only thing I dislike right now is that it doesn't work on mobile devices, not even tablets. Just gives you a warning that hey, you're a smartphone, fuck you and come back later when we do support you.

That's a bit lame especially considering Mobile Safari is plenty strong enough to support everything you need. Maybe it's got something to do with their monetization strategy; get us hooked on the web version then sell the iOS app for shitloads of money ... (hopefully this loving post is enough to get them to give me free stuff :P)

Update: apparently a MVP of mobile support is due to come out in a few days.

Anyway, yeah, try them out. They're cool.

Oh and as far as the UI goes. I love it because it's Spartan and no-nonsense and lets me do everything via simple to remember keyboard shortcuts. Please don't add any more features. kthxbai