Days 17 and 18 both defeated me. Star 1 was easy, Star 2 was not. Both were pretty quick to solve for the first star, though, so let's look at that.

In software engineering, a spinlock is a lock which causes a thread trying to acquire it to simply wait in a loop ("spin") while repeatedly checking if the lock is available. Since the thread remains active but is not performing a useful task, the use of such a lock is a kind of busy waiting.

There's no video for Day 17 because I was doing it in bed and yes, I did fall asleep while waiting for Star 2 to finish computing. It never did; my algorithm was too slow.

Unlike a real spinlock, the puzzle spinlock is trying to eat up infinite memory as well as infinite time.

For example, if the spinlock were to step 3 times per insert, the circular buffer would begin to evolve like this (using parentheses to mark the current position after each iteration of the algorithm):

(0), the initial state before any insertions.

The question was "What is the value right after 2017 gets inserted into the buffer?".

To find out, I built a recursive implementation of the spinlock algorithm above in Haskell. Because Haskell is fun.

The spinlock method takes 5 arguments, which I'm sure is sacrilege in Haskell, and returns a tuple: An integer and a list of integers.

The algorithm itself was simple to implement, but fraught with off-by-one errors.

If we have to keep going – i < iterations – then recurse with an edited buffer, updated position and i+1. Otherwise, return the result. A tuple with the next position and final buffer.

This worked great for the 2017 iterations from Star 1.

A little slow maybe, but it worked.

The idea is simple: Iterate 50 million times, look for the 0, return the value after it.

But the spinlock never finishes. Haskell's lazy evaluation gets in the way, and I couldn't figure out how to make it stop.

With lazy evaluation, we keep all iterations of the spinlock in memory until we print the final result. That's a problem. 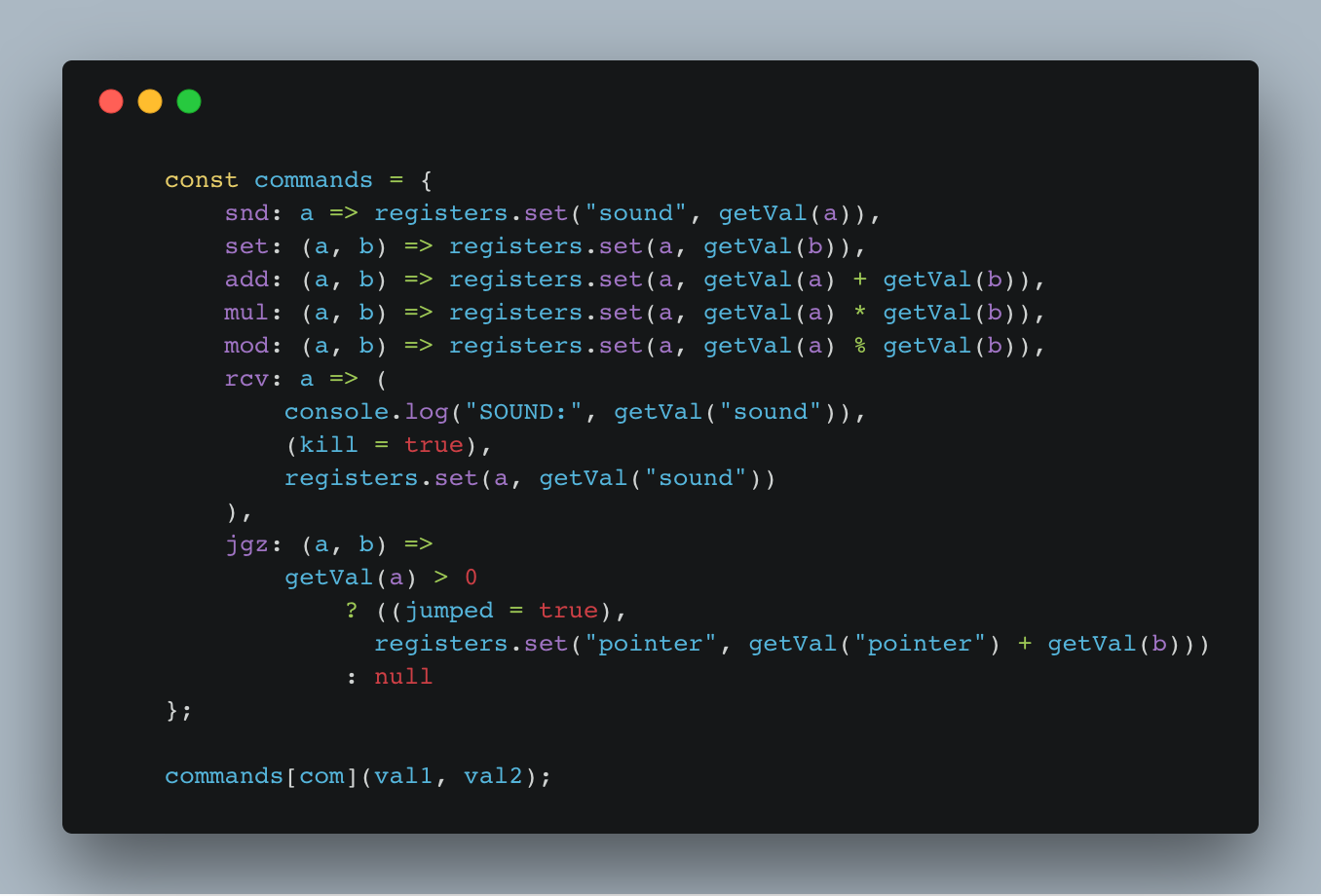 On Day 18 of our Advent of Code, we had to build an interpreter for a simple programming language. There are 7 commands that take 1 or 2 arguments. Arguments can be registers or values.

snd X plays a sound with a frequency equal to the value of X.

rcv X recovers the frequency of the last sound played, but only when the value of X is not zero. (If it is zero, the command does nothing.)

Our goal is to find the first non-zero value that rcv finds.

I built this one in JavaScript because why not. 😇

We start with a bunch of registers, which are a JavaScript Map.

This creates a register for each letter of the alphabet plus a sound register and a pointer. sound will be where snd puts its values and rcv reads them from, pointer is going to point to the current line of code we're executing.

The interpreter itself comes as just 39 lines of code. It's a simple language after all. Although I do think it's got enough instructions to be Turing-complete, but it lacks the memory. 25 registers won't cut it for Turing completeness.

You could, of course, expand it to have infinite registers 🤔

We split the line of code into a command and two values, val1 and val2.

Then we define a function for reading values, getVal. If the value given is a known register, we read from it; otherwise, we return the value itself.

A dictionary mapping all possible commands to a function that executes them helps us run the commands. Each function manipulates the registers and potentially flips the jump and kill flags.

When the current line of code is executed, we advance our pointer by +1 if we didn't jump. The interpreter returns the kill flag and the new registers.

The registers are actually changed in place, and there's no need to return, but I think this approach makes our implementation clearer.

With the interpreter in hand, we then have to add some looping to find the answer to AoC 18 Star 1.

Create registers, split program into lines, execute until a while condition is met. Either we jumped out of the program, or a line set the kill flag.

Star 2 is where it gets tricky. Those snd and rcv commands weren't actually about sound; they were send and receive commands, and you're meant to run two copies of this code in parallel.

They communicate with snd and rcv.

We have to expand our sound register into a message queue and add some logic for how it's shared between the two programs. Additionally, the puzzle wants us to pause execution of each program while it waits for the queue to get values.

Sounds hard. So I went to bed.