Nine months after saying "Fuck it, next year I'm running a marathon", I ran my first race event. Half of the San Francisco Marathon this Sunday.

I ran the 2nd half of the full marathon. Started at 8:17am at the far end of Golden Gate Park, near some sort of lake, and finished by the Ferry Building at 10:07am. An hour and fifty minutes later. And twelve seconds.

Ten minutes faster than my best training run. Faster than 84% of everybody else that day. Faster than 67% of people in my age group.

But only within 52% of what a guy my age could achieve in theory. That's because the world record for a half marathon is just 57 minutes and I am nowhere near an elite runner.

Running my first half marathon was as joyful as it was magical. I frolicked and the birds sang and sparrows flew and my mind was clear and the runner's high was high and the endorphins were pumping and a big fat grin covered my face.

I hate those people.

Running sucks. You have to get up early, you're cold, you're bored out of your mind, your legs hurt, your feet hurt, your lungs hurt, your abs hurt, and you know exactly how Spotify's random function works.

And you're cold and you're hot and you're dehydrated and you want to watch the world burn and everything sucks.

And to top it off, it burns all your gym gainz away so you have to work double hard just to keep up.

It's the best way in the world to get alone time. And it gives you time to think. And it forces you to think. And when you're done you're so happy that you don't have to keep going.

Running is like that. The best part is when you get to stop.

At least that's what running to train is like. Running to race is ... hard.

You've just spent a few days resting because you're not an idiot. You can train when your legs are sore, but you can't race with sore legs. You have to be rested.

And because you're rested, you run fast. Faster than ever before.

And because there's people around you, you run even faster. Faster than ever before.

At the finish line, there was no joy, no elation, no endorphin rush. There was just pain, breathing, and cold.

There you have it, my new personal best for a half marathon across San Francisco hills.

In the top 16% overall, top 25% for men, and top 33% for men my age. It feels like a good result. It's a huge improvement over my training runs. But it bugs me that it's not a top result. You know?

Age is still working for me, not against me. Especially in running. I've got the mental fortitude to do these stupid things, while still having the physical advantages of youth.

Even the data says so. For my age, results skew towards faster runs.

Which means that even though I'm in the top third of my age group, my result falls exactly where most results cluster.

After that, there are at most 2 people per minute, with most results being several minutes apart.

This indicates that something breaks around 1:50:xx. I don't know what breaks, but the data indicates that only those who are really good can go much faster than 1:50:xx.

Maybe this is the point of diminishing returns for half marathon training.

My training philosophy is simple - run a lot.

I started running regularly in April 2014 because a lull in boxing activity left me with too much energy and I couldn't sleep. So I ran every day. For four kilometers.

A 10k was far out and I would have died.

But running had become a staple and I kept running my short weekday runs and my long Sunday runs. Six times a week at first, then four times, and in the end I settled at three runs per week.

A short run of 8km on Wednesday and Friday, and a long run of 21km on Sunday.

It worked because by race time, I was mentally prepared and I knew what it takes. Sure the quicker pace caught me a bit off guard, but I knew how to mentally keep myself going and I knew that I wouldn't drop dead before the finish line.

Hint, it's the butt and legs that protest the most in the beginning, and it's your abs that are killing you when you're done. I don't know why.

To make sure I knew how to run fast, some of my short runs would be fartleks. A 4km fast-paced run one way, then a 4km fast run interspersed with 500 meter sprints on the way back.

Yes it kills you. Yes you need it anyway.

And that was really it. I ran a lot and I made sure I was mentally prepared for what was coming. 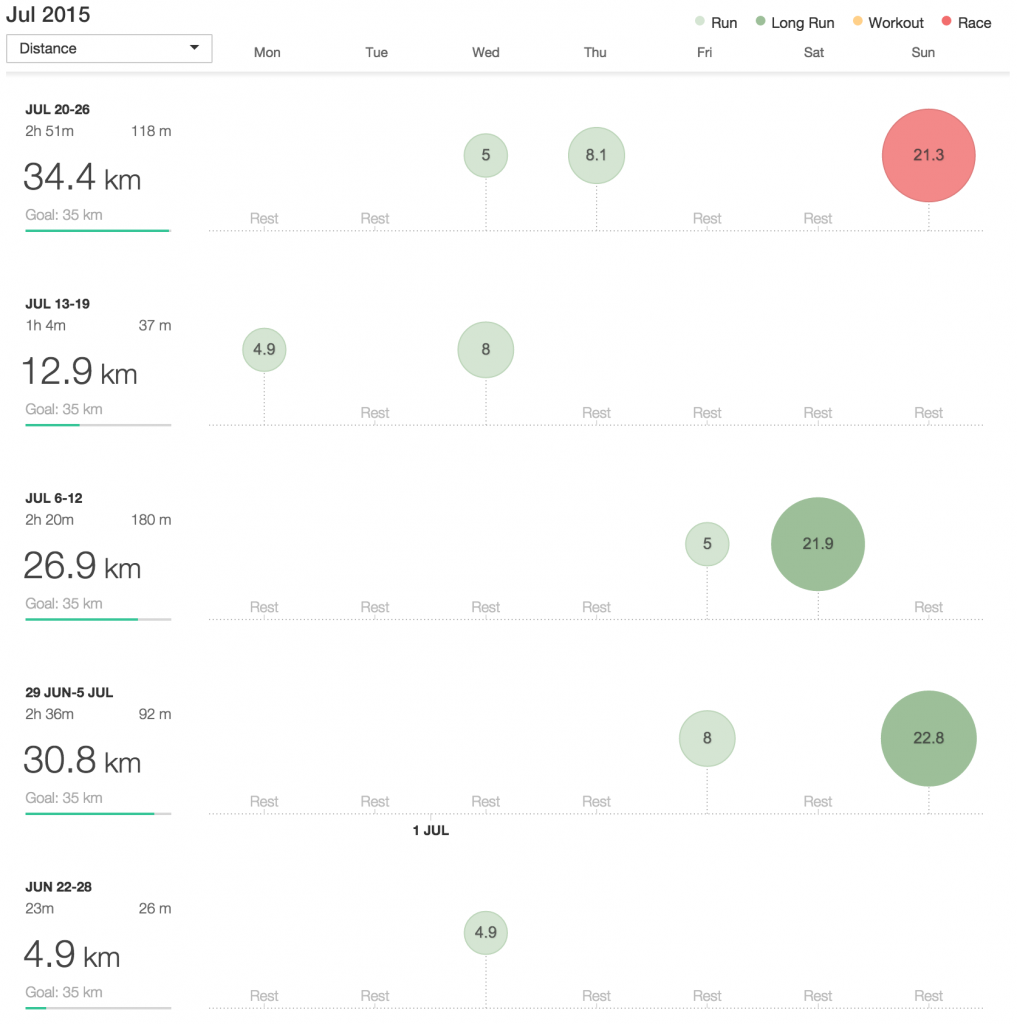 Now here's what I didn't count on: the full marathon I want to run is on October 25th.

Somehow I have to add 19 more kilometers to my longest run. And if nothing comes up I have 12 weekends to do it in.

So from now on, I have to add 2km to my long run every weekend. This gives me one full marathon of practice before the race.

And I want to run the race in under four hours.