Teleportation, would you use it?

Warning: the possible side-effects of reading this post include, but are not limited to, ethical dilemmas, wistful thinking and yearning for the future.

Next to warp speed teleportation is one of the few science fiction promises we still haven't got. Mostly because, as it turns out, they are still theoretically impossible.

Something about accelerating mass to light speed and infinities.

It seems the only way to teleport a person, who is probably too big to play around with quantum teleportation, is by cloning them. The process would work in three steps:

Star Trek used a similar trick with their teleports. Kirk would step on the plate, some buzzing, a flash, a bit of sparkles, whooosh and he was on the planet surface, ready to take on the world and making sure whomever was wearing the red shirt wouldn't come back.

Nothing wrong with this right?

Let's take a minute to reflect. To travel at the speed of light, you get cloned and the original you is killed. Destroyed even! If that doesn't bother you, let's make the technology slightly more realistic.

First of all, cloning is a process that takes a bit of time. My microbiologist friends clone things all the time. Even a freshman can do it! But considering how much time they spend in the lab, the process obviously takes some time. A few hours?

I don't know really, but let's say our technology has progressed to the point where it takes two days to copy a person.

Still, errors happen. You'd want to keep the original around while forming the copy, just to make sure you don't lose the whole thing. While I'm sure some people would enjoy living as nothing but data, I think many would prefer a guarantee of survival.

Okay, it takes two days to teleport. And both copies of you need to stick around while this happens.

Not very practical for earth-bound travel, but imagine being able to go to Mars in just two days. Even the fastest human trip to the moon took 3 days.

Even better, it feels instantaneous to you! Score.

When teleportation starts a direct copy of your mind is recorded. When you wake up fully formed on the other end it will feel like no time has passed. You stepped in. You woke up.

This is where things get interesting.

But what about the other you? The one that stepped in and is going to die in two days.

Two days is a lot of time to reflect on the certainty of death. They're a human, even though they know their life is going to continue on the other end ... what about those two days? Can they escape certain death?

What if they decide they're not quite ready to die. Run amok. Get into a lot of trouble they personally will never have to deal with. What if they fall in love with the best person ever, but in two days "they" won't remember a thing?

So let's lock them up in a cage of some sort. A waiting area if you will. Since this copy's only got two days to live and that other copy will have no recollection of what went on, we might as well save some resources and not feed this copy. They wouldn't even need light or any human companionship. Lock them up in solitary confinement for two days and then shoot them in the face.

It doesn't matter does it?

Who cares if a fully normal person suddenly gets locked up of, basically, their own accord. Is then treated poorly for two days to deal with any continuity issues in their brain and then coldly executed. Teleportation, baby! Right?

A simple question: Would you use teleportation technology? 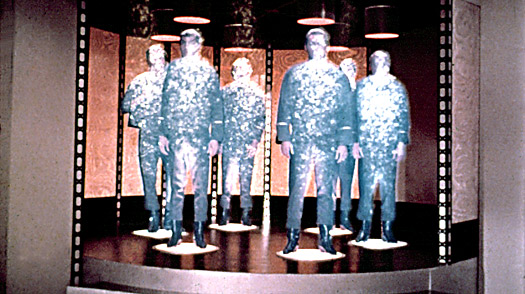