As a computer guy I often forget that there is a whole world out there beyond pictures of cats, big-O and trying to create things that should be impossible. When it strikes my fancy, I sometimes realize there's also mathematics.

But sometimes you come across something so simple, so very much in the realm of macro-physics, it blows your mind and you spend a couple of hours looking for even more pieces of remarkably simple, yet incomprehensible, technology.

Tesla valve with no moving parts

Somebody printed the valve and gave it a test

Cool things you can do with air and no moving parts don't stop there though. There's also something called a Vortex tube.

The vortex tube accepts pressurised gas on one end and then with no moving parts separates this flow into a stream of very hot gas and a stream of very cold gas. It could potentially be used to both heat and cool some things ... completely without moving parts. Just cool, hardcore, flow dynamics.

It baffles the brain. It really does. So much so that physicists have yet to reach a consensus on how a vortex tube even works.

And then it gets even better with a thermoacoustic heat engine - using high energy sound waves to pump heat from one end of a tube to another, or even using the heat difference to produce a loud noise. 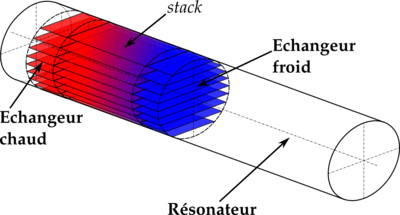 A thermoacoustic device basically consists of heat exchangers, a resonator, and a stack (on standing wave devices) or regenerator (on travelling wave devices). Depending on the type of engine a driver or loudspeaker might be used as well to generate sound waves.

The stack is a part consisting of small parallel channels. When the stack is placed at a certain location in the resonator, while having a standing wave in the resonator, a temperature difference can be measured across the stack. By placing heat exchangers at each side of the stack, heat can be moved. The opposite is possible as well, by creating a temperature difference across the stack, a sound wave can be induced. The first example is a simple heat pump, while the second is a prime mover.

Jet engines with no moving parts

And apparently there's a whole subset of jet engines that don't use any moving parts. Of course you've heard of a scram jet, but there's more.

There exists such a thing as a valveless pulse jet - I don't know exactly what this means, but it sounds pretty amazing.