Behind the curve ... of my bar donut chart 🤨

Last night I built something so cool it's still blowing my mind. And I got the idea from the flat earth society. Wat

It's a donut chart that transitions to a bar chart. Same component, same React code, different radius. 29,905px instead of 728px. 🤯

I actually got the idea from that flat earth documentary on Netflix. Behind the Curve. No joke.

Sure, I haven't watched it yet but the twitter buzz put flatearthers on my mind. Apparently there's a scene where they confidently disprove their own theory and it's pure gold.

Gotta watch this for the lulz 😂

Why do flat earth people believe the earth is flat?

It's because the curve is soooooooo big that it looks flat.

That gave me an idea for a client project I've been working on. They asked me to build a smooth transition from a donut-shaped visualization to a bar chart shape.

No idea how to pull that off so I built eeeeverything else first. Sometimes that's just how it be. You put the hardest things off as long as you can get away with 😇

And then I made a break through.

Swizec Teller encouraging you to Be An Expert@Swizec

Check this out, it combines the "game loop via state changes" with the "D3 runs transitions" approach 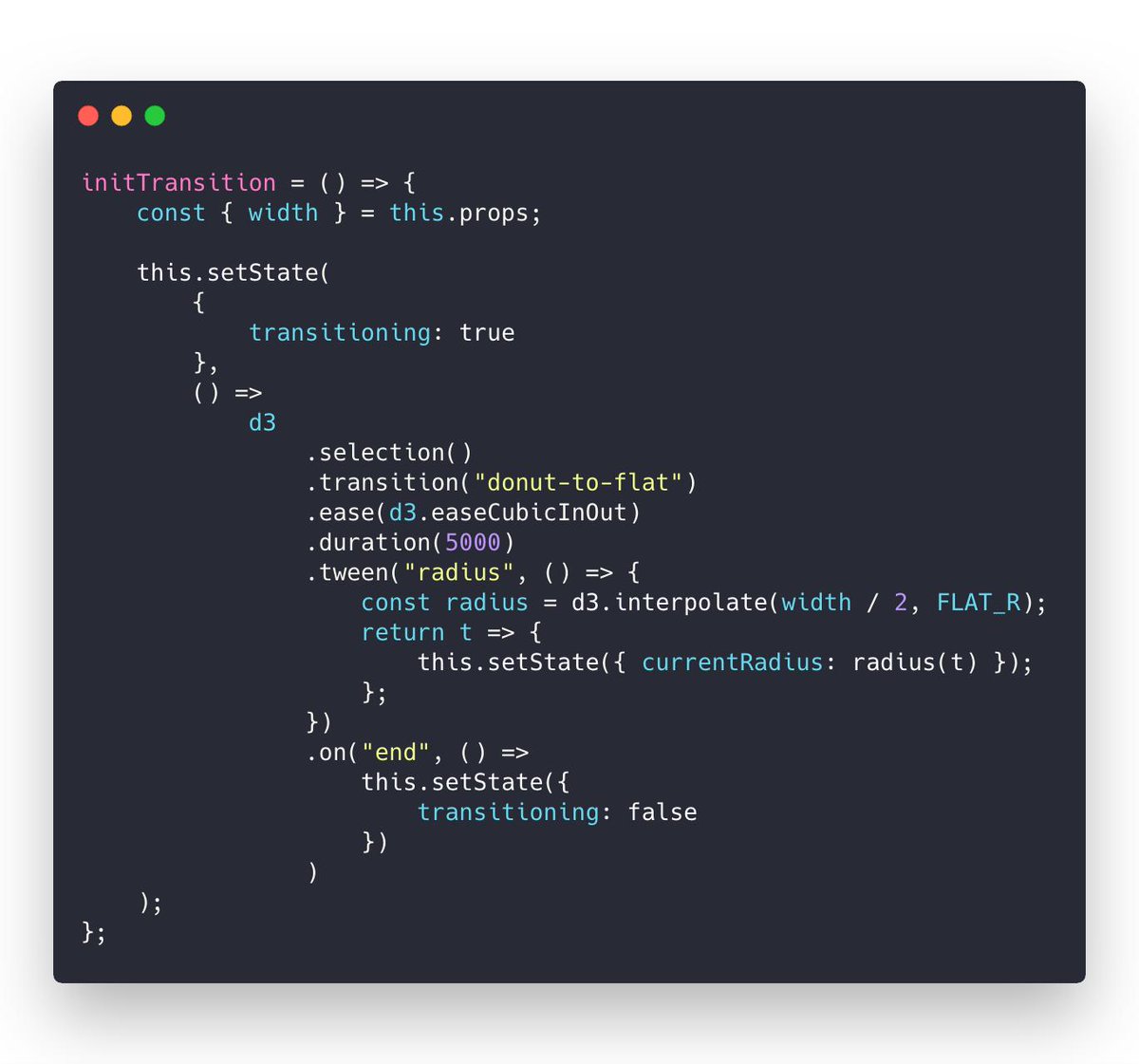 React for Data Visualization and my workshop teach you about two ways to animate in dataviz:

2) The D3 transition approach. You take a React component, use props as a staging area, render from state, and use componentDidMount or useEffect to hand rendering control over to D3. D3 runs its transition, manipulates the DOM directly, then hands control back to React.

A new approach to complex transitions

Now there's a 3rd approach. Something I never thought of before and it works beautifully. Adding it to React for Data Visualization this weekend ✌️

Let's look at the transition again

Here's what happens behind the scenes to make that work:

That's a lot of stuff.

And it's all driven by this code. The transition 👇

I call this on component mount. Could be on a click event or whatever. Starts a custom tween transition with D3.

That lets D3 control the timing, the easing functions, keeping it smooth, all of that. You don't have to think about any of it.

But instead of changing a DOM attribute, my tween calls this.setState on the React component. Meaning it's changing React state instead.

Since the donut bar chart knows how to render itself based on a radius ... well ... you can keep re-rendering at various radiuses and It Just Works.

Smooth transition by re-rendering the whole visualization 60 times per second. Even though it's a super complex component. Lots of moving parts and subcomponents.

Knowing everything that's going on behind the scenes I am blown away by how well it works.

PS: 29905px is a very precise number. Chrome has a bug and the flat bar breaks at 29906. Works on Firefox and Safari tho