Remember my blockchain-redux project from December? Probably not.

I'm building a library that lets anyone who can build a webapp build a blockchain. No, not an Etherium-distributed app or a crypto currency. Altho you could…

No, I'm exploring the idea that you can use blockchains as generic validated data storage. Got some state you wanna save and share? .dispatch an action. Your state is hashed, shared, and saved to a blockchain.

Every other app or client attached to the same blockchain can read your state, use it, and add to it.

Ideally, you shouldn't have to know how it works.

My ultimate goal is to give you this 👇

This weekend, we got very close.

To prove that blockchains are useful for more than crypto speculation, I'm making my interactive DOM benchmark collaborative. You can try it here: dom-benchmark.now.sh

There's a few kinks left to resolve before I can publish the collaborative version.

The goal is to store and share measurements from anyone who plays with the benchmark and show them as live-updating graphs and charts. We can finally find out how fast various web frameworks are in the real world on real people's computers. Won't that be fun? 🤘

Right now, on my local machine, each click adds a block to the blockchain, and every other instance has to reload the page to fetch the updates. I want to make this work live. 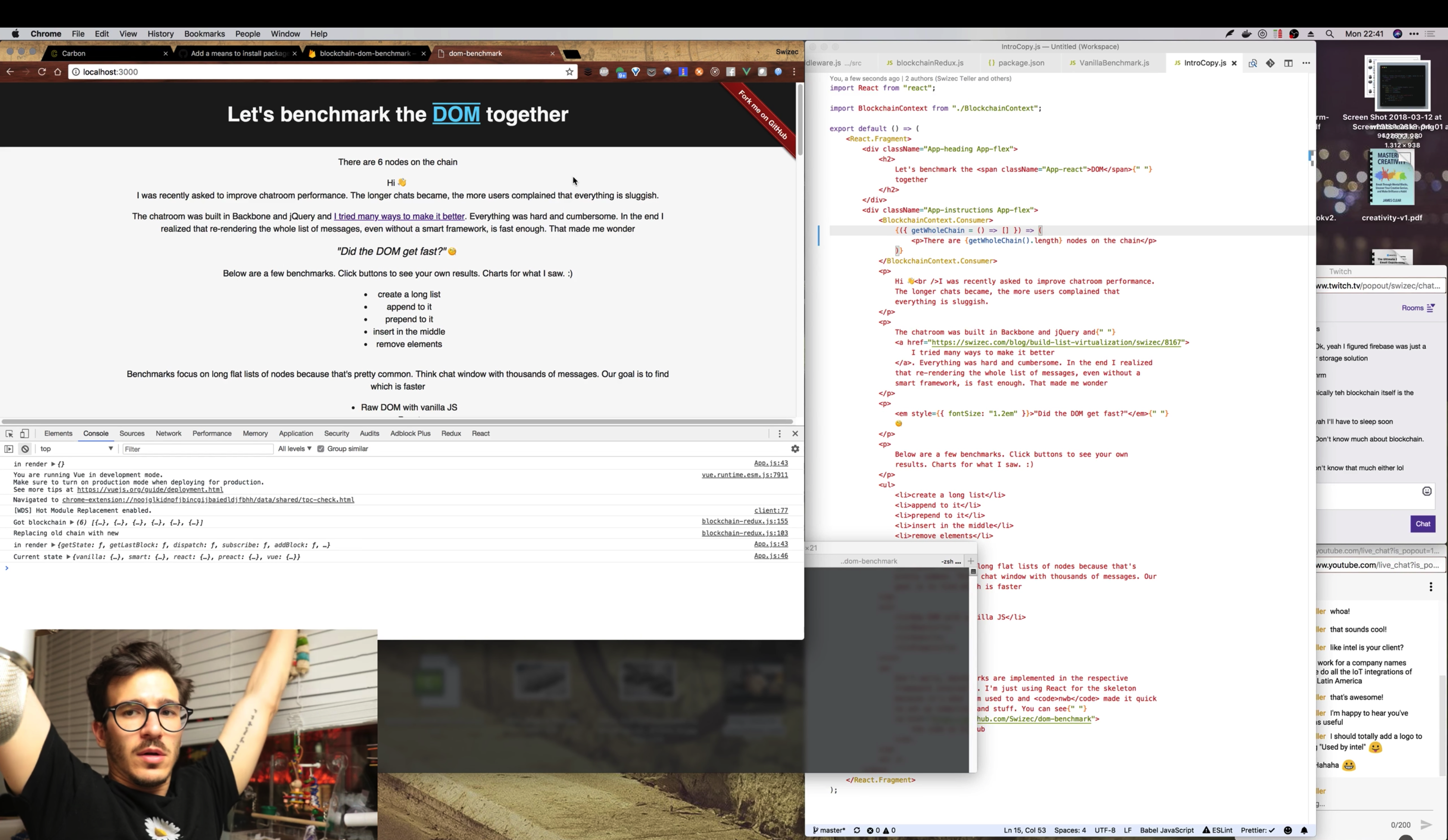 A mapping of benchmark types to results. An array of values for each button you can click.

Adding blockchain-redux to the benchmark

Saving benchmark data to the blockchain revealed a few bugs in blockchain-redux that I fixed. Unfortunately video of that livecoding session is blocked due to background music. Oops.

When the bugs were resolved, integration boiled down to this 👇

We initialize blockchain as an empty object, then use createStore to overwrite it with our blockchain store in componentDidMount. This is because it needs to talk to Firebase during initialization.

Firebase is used as a central hub right now. Eventually, I want to replace it with direct communication between nodes via WebRTC or similar.

Once the blockchain is initialized, we subscribe to changes and trigger a forceUpdate. The initial call to subscribers after our chain initializes happens before we have a chance to subscribe.

Right before <App /> unmounts, we unsubscribe from the store to avoid dangling callbacks.

Use context to pass the chain around

We use the new React 16.3 context API to pass the chain to child components.

We create a new context in a separate file. This allows us to import it in other components so we can define consumers.

We now have this.blockchain shared via context. Any component that needs to read from our blockchain has to use <BlockchainContext.Consumer>.

Read from the chain

In <IntroCopy>, we render the current length of our blockchain like this:

We wrap a paragraph in a BlockchainContext.Consumer, which takes a function as children. That function gets the context value as its argument, which lets us call getWholeChain() on our blockchain to read its length.

Another approach would be the traditional connected component pattern. We'd make a new BlockchainLength component, subscribe it to blockchain changes, and render values.

Adding to the chain

<VanillaBenchmark> (and soon all the others) takes an addToBenchmark function as props and calls it after updating its own benchmark display.

Name is the name of this benchmark (vanilla), value is the result, and type tells us which button you clicked.

The overall <Benchmarks /> component takes this callback and dispatches an action on the blockchain.

Looks familiar, doesn't it? It's just like Redux. You dispatch an action and reducers handle calculating the new state.

Our reducer for this example doesn't do much more than concat values to arrays. Like this:

All our reducers are the same, but they use different names. benchmarkReducer is a function that takes a name and returns a generic benchmark reducer. It appends values to the specified type's list of measurements.

Unlike just Redux, magic happens, and a new block is added to the blockchain.

And you thought it wasn't useful. Ha!

Next step for this particular example is to render some graphs and launch the collaborative benchmark. We'll see what happens.

On the blockchain-redux front, I'm most probably giving a lightning talk about it at Frontier Conf in April and a more proper talk at WeAreDevelopers in May.