This is a Livecoding Recap – an almost-weekly post about interesting things discovered while livecoding ?. Always under 500 words and with pictures. You can follow my channel, here. New content almost every Sunday at 2pm PDT. There’s live chat, come say hai ?

Well, this is embarrassing… there's supposed to be an embedded video right here but… I didn't make one.

After an hour of coding and talking and streaming and explaining all the things I was doing and struggling with OBS eating 300% CPU, leaving one core to almost keep up with Emacs and Chrome and Npm and JavaScript, someone said, "Errr… chatting with you is great but… uhm… no video today?"

No wonder the view count wasn't rising and everyone was bouncing! I had done 10 seconds of streaming, then I went blank ?

But I think I came up with a generalized, albeit not fleshed out, approach to taking a vanilla React project and adding MobX or Redux for state management. You should think of the code samples in this article as pseudocode.

You have a main component that is the source of truth. Child components have a bit of their own state, and they use callback chains to propagate changes back up the tree. 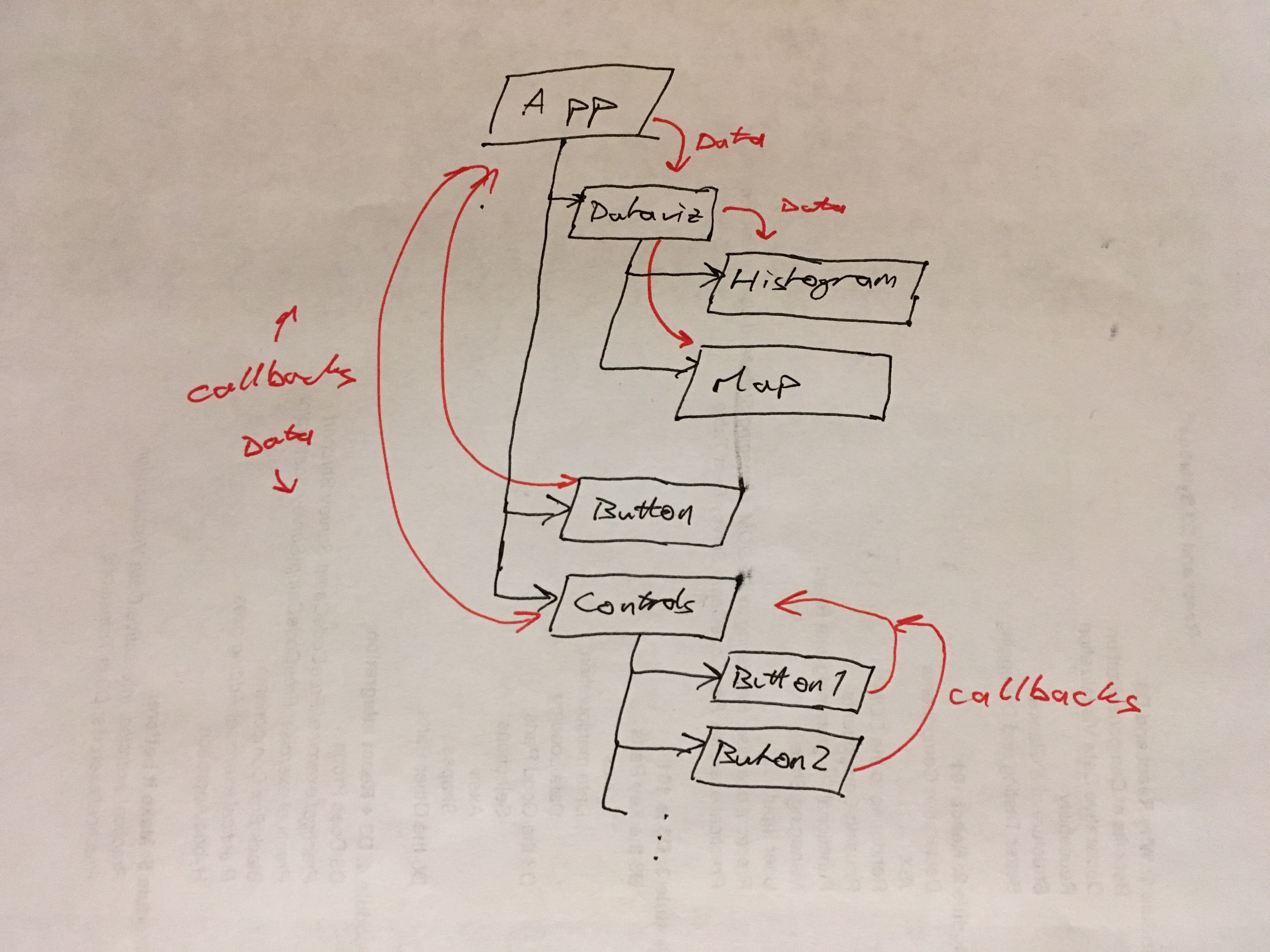 In theory, following the unidirectional dataflow paradigm: data/state flows down the tree, changes flow up the tree.

This is superb for example projects and small hierarchies, but it gets real messy real fast. You lose a lot of flexibility, and passing all those callbacks around gets old fast.

Oh, you want to make a global state change from a button deep down in this 10-step hierarchy? Better make all those components aware of what the tiny button is doing! Don't even think about moving it somewhere else.

That's where Redux or MobX step in.

First, you look at your App component's state. Let's say it has 5 important parts:

You can deduce your entire component tree from the value of those 5 properties. If that's not true, then your refactor will require more steps, and most of them will hurt :)

Your next step is to create a Redux or MobX store. I'm going to show you MobX because I've been enjoying it a lot lately.

Looking at that state, you can guess that rawData, filteringBy, filter, and someRandomBool are the state properties. filteredData can be computed. It smells like filter might be computable as well, but it's on the fence.

So no matter how often you hit that function, it only executes when its result might change. Otherwise, it's as fast as a static value.

That's why we used to put computable stuff in this.state. To make things faster. I like this new approach because it tells anyone who cares what's a base state of the system and what's deducible.

After that, you go back to your App, replace state with a store, and make App an observer.

And you're done. Mostly.

From this point onward, you should use this.store instead of this.state, and you can ignore this.setState in favor of good old this.store.someRandomBool = true. MobX's engine will trigger a re-render on any component that is an @observer and touches that value.

Tomorrow, we'll talk about refactoring that into actions so your business logic becomes an easy-to-understand state machine.