Remember that dancing fractal tree from December? That was built using what I like to call The Rich Animation Technique. TRAT for short.

Yes, I just came up with that. You might know of it as the "game loop" principle, or recalculate-redraw. It's how React's engine works.

When applied to animation, TRAT follows the idea that, if you update props 60 times per second and trigger a React re-render every time, animation happens. It's kinda crazy that it works so well, but work it does.

It's a spectacular approach when you need fine-grained control like making a dragged node follow the mouse or running an entire Space Invaders game.

But TRAT is annoying when you don't want or need fine control. When you just want a tiny animation that does a thing and doesn't bother you with the details, it’s a bit cumbersome.

It's a 50-by-50 field of black SVG <circle> elements. On mouse over, a D3 transition takes over and increases a circle's radius to 20, then back down to 5. While that's happening, we switch on colorization to make it pretty.

Colors come from D3's interpolateWarm scale laid out in a radial pattern. The radial pattern is high school math. Let me show you.

You can play with the code on CodePen, tweak params, try the dancing rainbow snake. I think it looks like a snake… also, I love emergent patterns like this. Transition each circle individually, and it looks like a connected blob.

We have two components: App and Dot. App sets up the grid of dots, and Dot handles each circle's transitions and coloration.

I tried adding a fly-in transition as well, but ReactTransitionGroup dies on 2500 nodes. ? I have a video of that fail somewhere on snapchat.

The App component needs only a render method that returns an SVG.

We're rendering a 600px-by-600px SVG with 50 nodes per row and column. We use D3's scalePoint for dot positioning because it does everything we need. Makes sure they're evenly spaced, gives them padding on the sides, and ensures coordinates are rounded numbers.

Here's a diagram of how scalePoint works:

To render the grid, we use two nested loops going from 0 to N. d3.range builds an array for us so we can .map over it. We return a ``component for each iteration.

Looking at this code: x={pos(x)} y={pos(y)}, you can see why D3 scales are so neat. All positioning calculation boiled down to a 1-parameter function call. \o/

The Dot component has a few more moving parts. It needs a constructor, a transition callback – flash, a color getter, and a render method.

We initialize state in the component constructor. The quickest approach is to copy all props to state, even though we don't need all props to be in state.

Normally, you want to avoid state and render all components from props. Functional principles, state is bad, and all that. But as Freddy Rangel likes to say "State is for props that change over time".

Guess what transitions are… props that change over time :)

So we put props in state and render from state. This lets us keep a stable platform while running transitions. It ensures that changes re-rendering Dot from above won't interfere with D3 transitions.

Not super important in our particular example because those changes never happen. But I had many interesting issues in this animated typing example.

For the render method, we return an SVG `element positioned at (x, y), with a radius, an onMouseOverlistener, and a style with thefillcolor depending onstate.colorize`.

When you mouse over one of the dots, its flash() method gets called as an event callback. This is where the transition happens that pops the circle bigger, then back to normal size.

Look at those triple-nested anonymous callbacks. Does it give you shivers? It's okay for small experiments, but don't do it too much in real code. Callback hell is real.

If our transition didn't return things back to normal, I would use that 'end' opportunity to sync React component state with reality. Something like this.setState({r: 20}) or whatever. Depends on what you're doing.

get color() – the colorization

Colorization doesn't have anything to do with transitions, but I want to explain how it works. Mostly to remind you that high school math, which you thought you'd never use again, is useful. 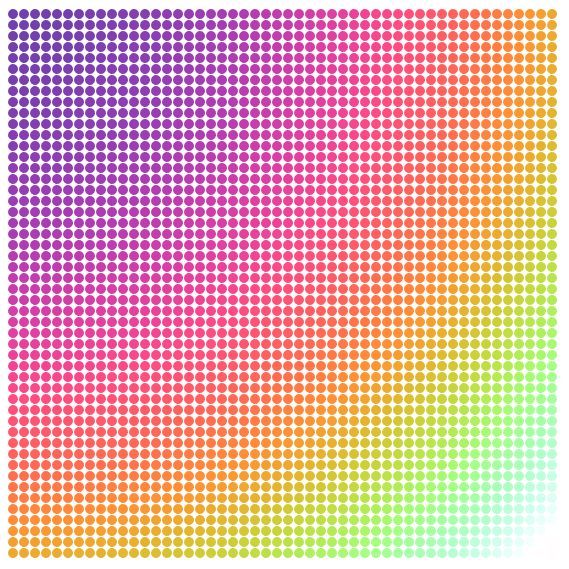 Colors follow a radial pattern even though d3.interpolateWarm takes a single argument in the [0, 1] range. We achieve the pattern using circle parametrization.

We calibrate the t scale to 1.2*maxPos**2 for two reasons. First, you want to avoid square roots whenever possible because they're slow. Second, adding the 1.2 factor changes how the color scale behaves and makes it look better. 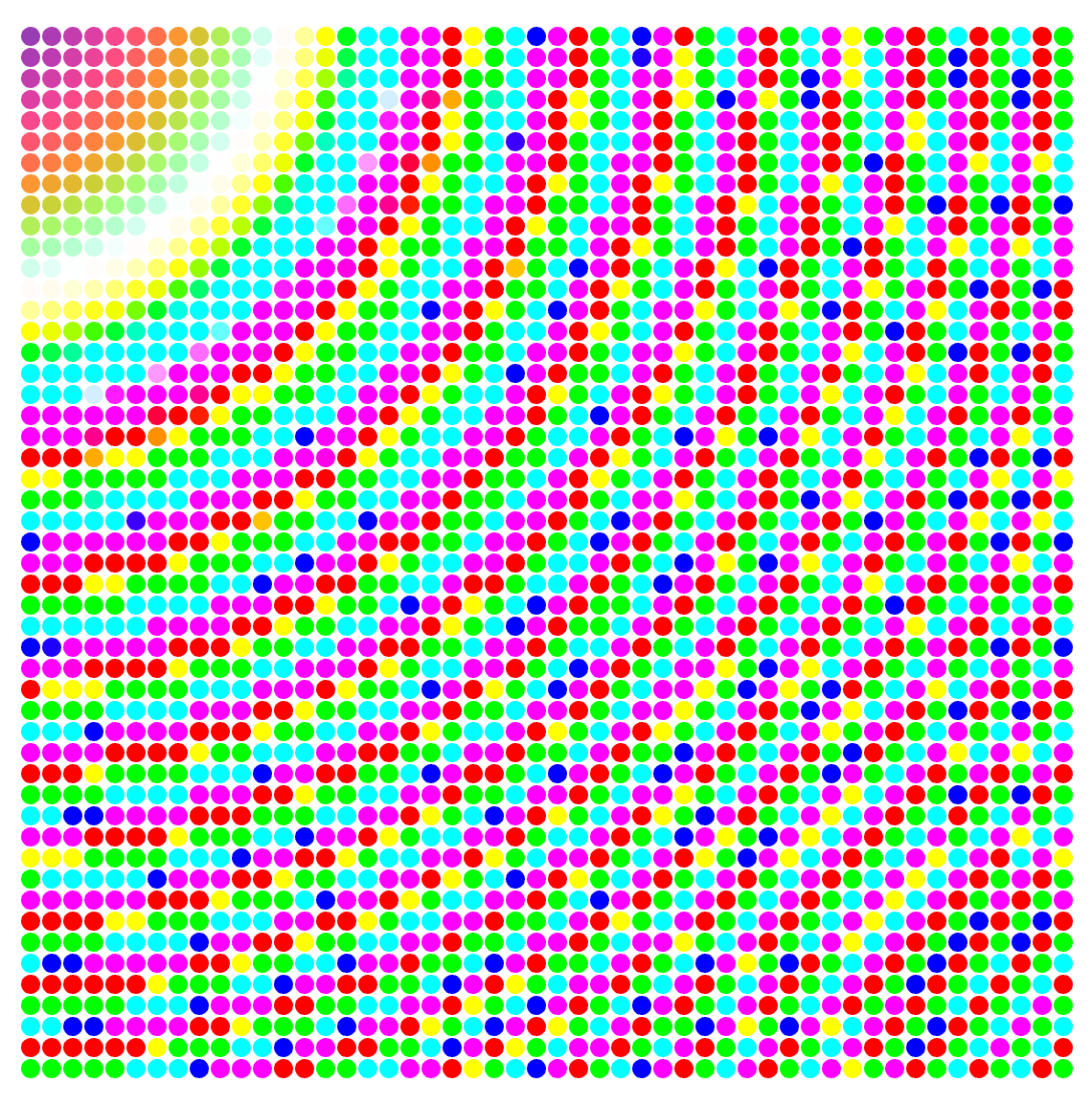 Play around and try different color scales, too. :)

There are a bunch of things we could've done in this example but didn't. One of them is the radius parameter.

We really should have taken the r parameter in as a property on <Dot>, saved it in state as a, say, baseR, then made sure the transition returns our dot back to that instead of a magic 5 number. Avoid peppering your code with random numbers.

Another improvement could be rendering more circles to provide a tighter grid. That doesn't work so well on CodePen, however. 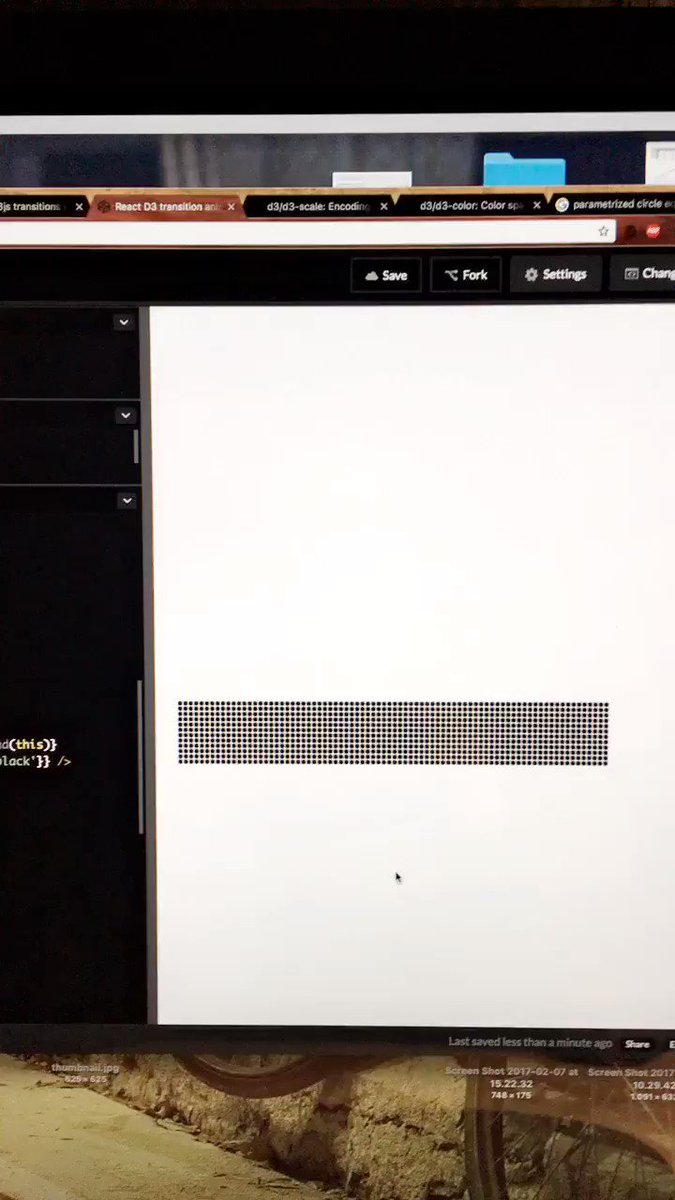 And I already mentioned the problems with ReactTransitionGroup that prevent us from making a nice load animation.

One idea I did have that would be really cool is to turn this colored grid into a music visualization thing. Not sure how to do that though. Is there a way to detect sound in a browser?

Could be a fun weekend experiment if there is ?