Amateurs sit and wait for inspiration, the rest of us get up and go to work

We’ve been talking about ideas this week my friend and if there’s just one tl;dr I want you to take out of this week, it’s this 👉 Don’t just wait around

Good ideas aren’t something that Just Happens™. They’re work. A process. A framework that you follow.

First you gotta put yourself in a position to notice good ideas. You need the right frame of mind.

Many were hot in the tropics, but there’s only one Ice King.

Many hated integrating payments, but there’s only one Stripe.

What’s the difference? Most complained and groaned then moved on. Frederic Tudor and the Collison Brothers turned their pain into an idea – a hunch.

Then they developed it.

Truth is, you need to develop an idea. You need to test it out. Validate. See if it works. Get a glimpse of initial interest, see how people respond, adjust.

Take my ServerlessReact.Dev course for example.

$25k doesn’t sound like much compared to the Ice King or Stripe, but it’s nothing to sneeze at either.

Imagine making $25k on top of your dayjob my friend. Wouldn’t be too bad would it? 😛

And what if I told you that by the time ServerlessReact.Dev launched, there was no risk? I knew it would work.

Because for a whole year before that launch, I carefully validated the idea, tested interest, experimented with pricing, developed the material, figured out what people do and don’t want to learn, how they want to talk about it, what they’re curious about, and why.

Hell, ServerlessReact.Dev made $24,000 just in validation tests before it ever became a flagship course on its own.

And that‘s what I want to show you in my new Find Your Idea workshop on May 10th at 1pm.

I want to show you the framework I use to notice, validate, and develop ideas. From as small as a blog article to write for exposure, to as big as a SaaS product to build. 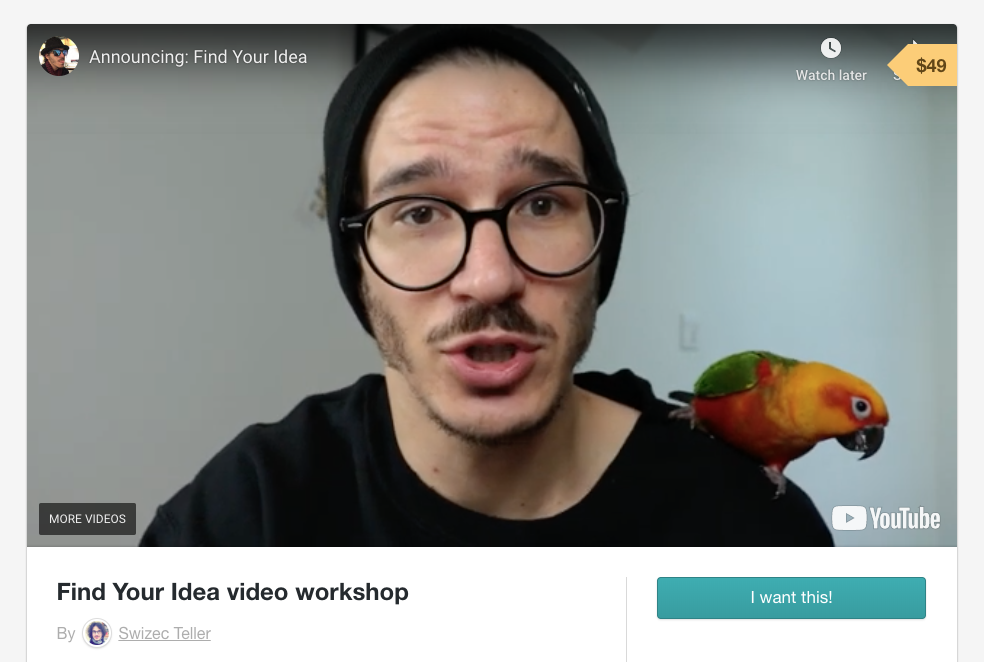 Find Your Idea is a short online workshop that teaches you how to notice, validate, and develop your ideas before you waste a bunch of time you don’t have.

And it closes at midnight tonight. So join now, my friend, it’s gonna be great.

You’ll learn all the mental models and frameworks I use after 10 years of running various businesses and making money online.

Can’t make it live? No worries.

PS: Find Your Idea closes tonight and it won’t be just $49 ever again ❤️